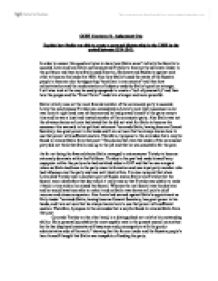 Explain how Stalin was able to create a personal dictatorship in the USSR in the period between 1924-1941.

GCSE Coursework- Assignment One Explain how Stalin was able to create a personal dictatorship in the USSR in the period between 1924-1941. In order to answer this question I plan to show how Stalin wasn't initially the favorite to succeed Lenin and how Stalin outmaneuvered Trotsky to become the dominate leader in the politburo and then how Stalin used Zinovier, Kamenev and Bukharin against each other to become the leader by 1929. Also how Stalin's used the wants of the Russian people to become ruler by supporting "socialism in one country" and then how collectivization and the modernization of industry made by Stalin's position stronger. I will also look at the way he used propaganda to create a "cult of personality" and then how the purges and the "Great Terror" made him stronger and more powerful. Stalin initially was not the most favored member of the communist party to succeed Lenin this was because Trotsky was considered as Lenin's most likely successor as he was Lenin's right hand man as they say and he had proved himself to the party many a time and he was a loyal and trusted member of the communist party. ...read more.

It is also rumored that when Lenin died Trotsky was in southern part of Russia and so Stalin told Trotsky that the funeral was a day before that day which it really was so that Trotsky was unable to make it back in time and so he missed the funeral. Whereas the real funeral was the day later and he would have been able to make it and so Stalin was shown as Lenin's chief mourner and closes companion. Also Lenin had warned against Stalin's appointment as Party leader "comrade Stalin, having become General Secretary, has great power in his hands, and I am not sure that he always knows how to use that power with sufficient caution. Therefore, I propose to the comrades that a way be found to remove Stalin from that post Comrade Trotsky on the other hand, is a distinguished not only by his outstanding ability. He is personally probably the most capable man in the present council committee but he has displayed excessive self-assurance and preoccupation with the purely administrative side of the work." ...read more.

As well as using other members of the party to his advantage he also used the people. Both Stalin and Trotsky had different ideas on how the future of the party should be run. Trotsky wanted a "permanent revolution" involving the helping and encouraging other countries whereas Stalin believed that they should make Russia itself strong first then encourage other countries to become communist he called this "socialism in one country". Stalin's idea/ plans for the future were much better received by the Russian people because they were tired of war and if they went along with what Trotsky wanted then they would be in a constant war and Stalin's idea involved the Russian people doing something about their own futures and the way that they want to live. In helping the Russian people Stalin's position was strengthened through collectivization and modernization of Russia. Russia needed modernizing so that it would be able to resist the ever increasing threat of invasion; it had to be expanded in the three major areas coal, oil and steel. In order to do this agriculture would have to be increased ...read more.