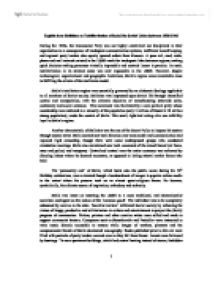 Explain how Stalinism and Totalitarianism affected the Soviet Union between 1928-1945.

Explain how Stalinism as Totalitarianism affected the Soviet Union between 1928-1945 During the 1920s, the Communist Party was not highly centralized nor disciplined in their organisation as a consequence of inadequate communication systems, inefficient record keeping, and regional party leaders who openly ignored orders from Moscow. A poor rail, road, radio, phone and mail network existed in the USSR made for inadequate links between regions, making quick decision-making processes virtually impossible and controls looser in practice. As such, totalitarianism in its strictest sense was near impossible in the USSR. However, despite technological, organizational and geographic limitations, Stalin's regime came remarkable close to fulfilling the criteria of the totalitarian model. Stalin's totalitarian regime was essentially governed by an elaborate ideology applicable to all members of Soviet society. Stalinism was impressed upon Soviet life through intensified control and manipulation, with the ultimate objective of manufacturing statewide unity, conformity and social cohesion. This movement was facilitated by a sole political party whose membership was restricted to a minority of the population (only 2 million of Russia's 30 million strong population), under the control of Stalin. This small, tight-knit ruling elite was infallibly loyal to Stalin's regime. ...read more.

School children joined 'Young Pioneers' - the youngest branch of the CPSU. Increasingly, importance was placed on family values, motherhood and the leadership of the husband over the wife. Progressive moral standards promoted by Alexandra Kollontai in 1920 were replaced by conventional rigidity. This was typical of a totalitarian regime which was conservative in nature. Education was also impacted on. By 1928 40,000 party schools and 19 party universities had evolved. The 1935 Education Law made classrooms and curriculum more disciplined. Report cards and test marks, which had been abolished during the 1920s, were re-introduced along with school uniforms. The numbers of students of working class origin at universities rose from 40,000 (1/4 of total student population) in 1928 to 290,000 (over 1/2) in 1932.The result was the near total disappearance of illiteracy. By 1939 of the 9-49 age bracket, 94% in towns and 86% in the countryside could read, arguably a positive feature of totalitarianism. A new technical intelligentsia was created as thousands of working class members of CPSU mobilized to undertake short engineering courses, who became known as the 'promoted ones'. Equal wages for men and women abolished. ...read more.

Lenin had desired that non-Russian nations would remain part of the USSR by their own free will. During the 1920s, the non-Russian national elites had sided with the Bolsheviks, but wanted to proceed with integrating communism along their own national paths. However, according to Stalin, 'great Russians knew best'. He wanted to maintain control over all nationalities. Colonialism was again revered as affording 'backward people' an advanced level of development, ie communism. Ethnic minorities with strong nationalistic tendencies, such as Ukrainians, were suppressed. The liquidation on national elites was achieved during Stalin's purges and show trials. Under this policy of "Russification", national 'self-adulation' was fostered through public manifestations of pride and loyalty towards Russia in the form of parades and the perpetuation of stereotypes and clich�s. Under this nationalism and patriotic frenzy, allegiances of case, locality and nationality were swept aside. The irony was that Stalin himself was Georgian. The wealth of totalitarian measures undertaken by Stalin to stamp his control over Soviet society and project his ideal of 'Soviet Realism' dramatically affected all facets of Soviet life during 1928-1945 from culture, the arts, education, employment, family values, religion, and foreign policy towards non-nations. The centralized, coercive control of military and secret police under the instruction of Stalin's ruling elite effectively created a society completely dominated by Stalin's brand of socialist ideals. 1 ...read more.