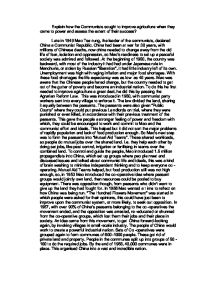 Explain how the Communists sought to improve agriculture when they came to power and assess the extent of their success?

Explain how the Communists sought to improve agriculture when they came to power and assess the extent of their success? Late in 1949 Mao Tse-tung, the leader of the communists, declared China a Communist Republic. China had been at war for 30 years, with millions of Chinese deaths, now china needed to change away from the old life of fear, isolation and oppression, so Mao's readiness to set up a peaceful society was admired and followed. At the beginning of 1950, the country was backward, with most of the industry it had had under Japanese rule in Manchuria, or stolen by Russian "liberation", it had little industry left of its own. Unemployment was high with raging inflation and major food shortages. With these food shortages the life expectancy was as low as 40 years. ...read more.

So Mao's next step was to form the peasants into "Mutual Aid Teams". These shared workloads, so people do mutual jobs over the shared land. I.e. they help each other by doing set jobs, like pest control, irrigation or fertilising in teams over the combined land. To control and guide the people, Mao introduced 1.5 million propagandists into China, which set up groups where people meet and discussed issues and talked about communist life and ideals, this was a kind of brain washing to minimise independent thinking and to keep everyone co-operating. Mutual Aid Teams helped, but food production still was not high enough, so, in 1953 Mao introduced the co-operative idea where peasant groups would jointly own land, then resources could be pooled to buy equipment. There was opposition though, from peasants who didn't want to give up the land they had fought for. ...read more.

This organised China into a vast and incredible nation. Up to this point the organisation of the Communists outdid almost all of the nationalist nations in terms of food and industrial production (steel production was doubled). This seems to be an incredible feat to have achieved, but the Chinese people were exhausted, many people had died and people started to doubt the system. The production of food and resources was necessary though, for the society to cope with the soaring population and lack of food stores. The Communes were an incredibly effective idea, and at first they were, yet the impossible targets they were given meant that industrial production was rushed and the tools and machinery made were of poor standard and when used, they fell apart and were useless. As an idea the system worked beyond that of any other, but the fact that the control of the government over rid common sense the system became flawed and agriculture plummeted below what it could have been if organised more rationally. ...read more.