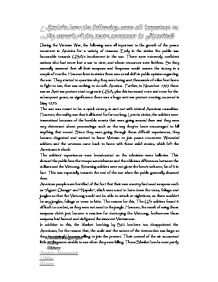 Explain how the following were all important to the growth of the peace movement in America?

In addition to this, the blanket bombing by B52 bombers too disappointed the Americans, for the reason that, the scale and the nature of the destruction was large so they increasingly become willing to join the protest. Their control of the air accounted little as they were unable to see whom they were killing. These Blanket bombs were partly used to destroy swam and paddy fields so it would become clear and the Vietcong could no more be suitable for tanks. As a result of using such terrific weapons, there were further blow to the already low morals in America. The result of this was the huge My Lai Massacre in March 1968, to end the massive loos of innocent lives. Over 300 Vietnamese women, children, babies and old men were gunned by American troops this event. The truth of the massacre shocks us even more and has changed the opinions of Americans. Soon the public began to oppose their own armies because they became more aware that the army was covering up atrocities. ...read more.

Unlike the Korean War and world war two, the government decided not to censor it and let the press have free access. They sent horrifying scenes such as small children being burned alive by napalm. They could actually see all the blood and the guts, as practically every citizen owned a television, these shocking images bombarded all over the public, and they become emotionally involved and sympathises for the war fell. The sickened American was appalled at these sights and stories and so growing youth movement, among started the protest against the Vietnam War. This was very damaging to the war effort. Even the My Lai Massacre brought up to the public attention in the course of the media, this shocked the world, and creates yet more opposition to the war. News editors made people question why the American were involved in a war many thousands of miles away. They have also made people aware of the growing number of casualties and the high costly of the war, as well as emphasising that the war was dragging on. Pauline Alagarajah 11Mur History ...read more.