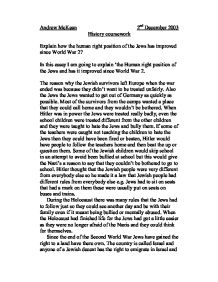 Explain how the human rights position of the Jews has improved since World War 2?

Andrew McKean 2nd December 2003 History coursework Explain how the human right position of the Jews has improved since World War 2? In this essay I am going to explain 'the Human right position of the Jews and has it improved since World War 2. The reason why the Jewish survivors left Europe when the war ended was because they didn't want to be treated unfairly. Also the Jews the Jews wanted to get out of Germany as quickly as possible. Most of the survivors from the camps wanted a place that they could call home and they wouldn't be bothered. When Hitler was in power the Jews were treated really badly, even the school children were treated different from the other children and they were taught to hate the Jews and bully them. ...read more.

Jews had to sit on seats that had a mark on them these were usually put on seats on buses and trains. During the Holocaust there was many rules that the Jews had to follow just so they could see another day and be with their family even if it meant being bullied or mentally abused. When the Holocaust had finished life for the Jews had got a little easier as they were no longer afraid of the Nazis and they could think for themselves. Since the end of the Second World War Jews have gained the right to a land have there own. The country is called Israel and anyone of a Jewish decent has the right to emigrate in Israel and live in the Jewish state, but there are many problems that face Israel * The Jews had always regarded Israel as their ancient homeland. ...read more.

Some things have improved they are; Non-Jews are aware of the Holocaust this is remembered on January 27th it is called National Holocaust day. Films have been made that show the Jews what it was like. E.g. schindlers list; Life is Beautiful and the Pianist. This has all increased awareness of how the Jews were treated. Overall I think that the human right position has improved although there are countries where this is not the case. The biggest improvement was the creation of Israel but this has caused problems within the country, Russia is one country where hatred of the Jews continued until recently. Many Jews had been sent to work in camps. By Andrew Mckean ...read more.