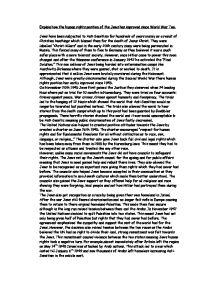 Explain how the human rights position of the Jews has improved since World War Two. Jews have been subjected to Anti-Semitism for hundreds of years mainly as a result of Christian teachings which blamed them for the death of Jesus Christ. They were labelled "Christ-Killers" and in the early 20th century many were being persecuted in Russia. This forced many of them to flee to Germany as they believed it was a much safer place with a more tolerant society. However, once Hitler came to power this soon changed and after the Wannsee conference in January 1942 he activated the "Final Solution." This saw millions of Jews being herded into extermination camps like Auschwitz-Birkenau where they were gassed, shot or worked to death. It is approximated that 6 million Jews were brutally murdered during the Holocaust. Although, Jews were greatly discriminated during the Second World War there human rights position has vastly improved since 1945. On November 20th 1945 Jews first gained the Justice they deserved when 24 leading Nazi where put on trial for 10 months in Nuremburg. ...read more.

However, unlike many racial movements the Jews did not have councils to safeguard their rights. The Jews set up the Jewish council for the ageing and for public affairs meaning that Jews in need gained help and rebuilt there lives. They also allowed the Jews to be recognised as an important race giving them rights which they had never had before. The councils also helped Jews become accepted in their communities as they provided information to non-Jewish cultures which made them better understood. The councils also gained the Jews support as they offered help for all religions and race showing they were forgiving, kind people and not how Hitler had portrayed them during the war. The Jews also got recognition as a race by being given their own homeland in Israel. After the war Jews still feared discrimination and no longer felt safe in Europe causing them to return to there original homeland-Palestine. This made them feel secure although in the long run raised tension between them and the Arabs. ...read more.

Fortunately, on March 5th 1953 Stalin unexpectedly died and the mistreatment of Jews on a large scale ended. However, it was not till the 1980's that Soviet Jews rights were fully restored. Although, Jews have been discriminated for hundreds of years they are now at the top of society and role models for many. Famous Jews include Albert Einstein, Barry Manilow and Steven Speilberg. One of Speilberg's most famous films is Schindler's List, a true story which created world-wide sympathy for the Jews. Similarly, the studies of Judaism and the holocaust in schools has improved the human rights of Jews as it has allowed them to be better understood and stopped Anti-Semitism in younger generations In conclusion, I believe that the human rights position of Jews has greatly improved since 1945 as not only have they been given the same rights as any other race or religion by the United Nations charter but Anti-Semitism is no longer publically acceptable. Although, research shows discrimination of Jews still exists this is only by minorities and laws still show Jews as equal. ...read more.