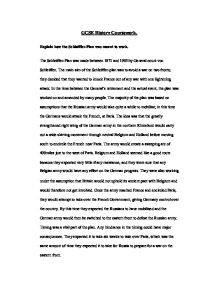 Explain how the Schleiffen Plan was meant to work

GCSE History Coursework. Explain how the Schleiffen Plan was meant to work. The Schleiffen Plan was made between 1871 and 1905 by General count von Schleiffen. The main aim of the Schleiffen plan was to avoid a war on two fronts; they decided that they wanted to knock France out of any war with one lightening attack. In the time between the General's retirement and the actual event, the plan was worked on and amended by many people. The majority of the plan was based on assumptions that the Russian army would take quite a while to mobilise; in this time the Germans would attack the French, at Paris. The idea was that the greatly strengthened right wing of the German army in the northern Rhineland would carry out a wide skirting movement through neutral Belgium and Holland before moving south to encircle the French near Paris. The army would create a sweeping arc of 400miles just to the west of Paris. Belgium and Holland seemed like a good route because they expected very little if any resistance, and they were sure that any Belgian army would have any effect on the German progress. They were also working under the assumption that Britain would not uphold its ancient pact with Belgium and would therefore not get involved. ...read more.

Stalemate was developed because warfare went from a war of movement to a war of attrition. Although there were some advances with the trenches, progress was slow and often there was not enough support for a side, therefore they often had to retreat, once again developing the stalemate. Calvary was vulnerable in trench warfare, therefore waves of attacking infantry took over as new weapons such as gas attacks, tanks and poison were brought into existence. Despite such high losses, neither side were prepared to compromise and make peace, so little ground was gained. New tactics were used over and over again, no one seemed to learn from previous mistakes. Although the new tactics and artillery were put into place they were still not sophisticated enough to break the stalemate on the western front. The following were equally important reasons why the stalemate on the Western Front was finally broken: new technology like the tank, the American entry into the war, the blockading of German ports, the German offensive in Mach 1918. Explain how far you agree with this statement. There are a number of reasons why stalemate on the Western Front was broken; they are all equally important factors. Some factors include the naval blockade on German Ports, the American entry into the war in April 1917, the Ludendorff offensive in March 1918 and the continuous improvements to technology throughout the war. ...read more.

New technology resulted in all sides changing their tactics accordingly. The submarines at sea became highly effective in the naval war as the torpedo was introduced. Even the greatest of battle ships became vulnerable to the powerful torpedos. Cambrai is a good example of the effective use of tanks in the war. Over 350 tanks were used to good effect, although a loss was sometimes found, as they were unable to hold the ground they had gained from the opposition. Mines were introduced around the same time, mostly to defend ports and harbours or to attack ships. The tactic widely used was to lay them in harbours so that when enemy ships set off, the mine was triggered and they were aught by surprise. The principle of the new technology was that it was used more and to a more positive effect, taking the war back from one of attrition to one of movement. For the Germans it was now a race against time to destroy the French and British, thus bringing the continent under German control, preventing an American army from meeting. Therefore the entry of the Americans into the war was a very important reason for the stalemate being broken, as it lead to the Ludenrdorff offensive in March 1918, which aimed to break stalemate and win the war before the American troops arrived in France. ...read more.