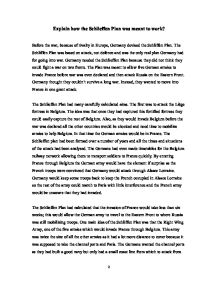 Explain how the Schlieffen Plan was meant to work?

Explain how the Schlieffen Plan was meant to work? Before the war, because of rivalry in Europe, Germany devised the Schliffen Plan. The Schliffen Plan was based on attack, not defence and was the only real plan Germany had for going into war. Germany needed the Schlieffen Plan because they did not think they could fight a war on two fronts. The Plan was meant to allow five German armies to invade France before war was even declared and then attack Russia on the Eastern Front. Germany thought they couldn't survive a long war. Instead, they wanted to move into France in one giant attack. The Schlieffen Plan had many carefully calculated aims. The first was to attack the Li�ge fortress in Belgium. The idea was that once they had captured this fortified fortress they could easily capture the rest of Belgium. ...read more.

One main idea of the Schliffen Plan was that the Right Wing Army, one of the five armies which would invade France through Belgium. This army was twice the size of all the other armies as it had a lot more distance to cover because it was supposed to take the channel ports and Paris. The Germans wanted the channel ports as they had built a good navy but only had a small coast line from which to attack from and get supplies. Having the French coastline would give them more control of the sea. The sea would allow them to ship in supplies and also stop the British arriving with troops and supplies. Germany was aware that in 1839 Britain had signed a treaty with Belgium promising to defend the country against any attacker, but the Schliffen Plan assumed that the British would probably ignore the treaty as it was so old. ...read more.

In fact Russia had become uneasy about Germany for a while before the war so had been making preparations for war before it was declared. Secondly, that all the French would be fighting in Alsace Lorraine. The Schliffen Plan did not realise how passionately France felt about Paris. The French were prepared to fight until the death and so quickly travelled up France to fight the Germans. Thirdly, the Germans thought that Britain may get involved to uphold the treaty with Belgium but they assumed the army would be quite small and could easily be defeated. In fact Britain joined the war quite quickly and produced a small but highly trained army, which challenged the Germans. The Schlieffen Plan was a plan to avoid Germany having to fight a war on two fronts. It involved attacking France by surprise by going through Belgium. France would them fall before Russia was even mobilized. Germany would then be free to concentrate on winning the war on the Eastern Front. 2 ...read more.