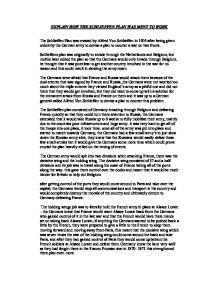 EXPLAIN HOW THE SCHLIEFFEN PLAN WAS MEANT TO WORK

EXPLAIN HOW THE SCHLIEFFEN PLAN WAS MENT TO WORK The Schlieffen Plan was created by Alfred Von Schlieffen in 1905 after being given orders by the German army to devise a plan to counter a war on two fronts. Schlieffens plan was originally to invade through the Netherlands and Belgium, but moltke later edited the plan so that the Germans would only invade through Belgium, he thought that it was pointless to get another country involved in the war for no reason and this could result in slowing the army down. The Germans were afraid that France and Russia would attack them because of the dual entente that was signed by France and Russia ,the Germans were not worried too much about the triple entente they viewed England's army as a pitiful one and did not think that they would get involved, but they did need to come up with a solution for the immanent attack from Russia and France on them and it ...read more.

The German army would spit into two divisions when attacking France, there was the decisive wing and the holding wing. The decisive wing consisted of 37 and a half divisions and its job was to travel along the coast of France taking all of the ports along the way- this gave them control over the docks and meant that it would be much harder for Britain to help out Belgium after getting control of the ports they would come around to Paris and take over the capital, the Germans would stop all communications and transport in the country and would completely destroy the morale of the country and ultimately circum to Germany defeating France. The holding wings job was to literally hold the French army in place at Alsace Lorain - the Germans knew that France would want Alsace Lorain back from the Germans who gained control of it in the last war and that the French would have there minds set on taking back ...read more.

Germany decided to attack France by invading Belgium because Belgium was a very easy country to invade, it was flat and clear- there were hardly any hills or big forests that would tire out the German soldiers, they could just swiftly move in and out of Belgium with little problems at all, the Germans knew that Belgium would put up some resistance but not enough to halt the German advance. The Germans knew that it was almost inevitable that the second they invaded France, the French would almost certainly launch an attack through Alsace Lorain again that was why the holding wing was in place, if the holding wing did there job and held off the attack by the French then the decisive wing would come from behind and take over the best invasion route between France and Germany, this would prevent the French from launching another attack on the Germans in the near future. ...read more.