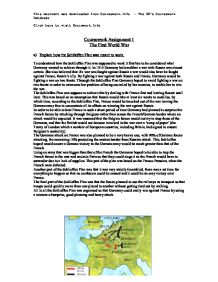 Coursework Assignment 1 The First World War a) Explain how the Schlieffen Plan was meant to work. To understand how the Schlieffen Plan was supposed to work it first has to be considered what Germany wanted to achieve through it. In 1914 Germany believed that a war with Russia was almost certain. She also believed that if a war was fought against Russia a war would also have be fought against France, Russia's ally. By fighting a war against both Russia and France, Germany would be fighting a war on two fronts. Through the Schlieffen Plan Germany hoped to avoid fighting a war on two fronts in order to overcome her problem of being encircled by her enemies, to enable her to win the war. ...read more.

In order to be able to beat France in such a short period of time Germany had planned to surprise the French forces by attacking through Belgium rather than across the French/German border where an attack would be expected. It was assumed that the Belgian forces would not try to stop those of the Germans, and that the British would not become involved in the war over a 'scrap of paper' (the Treaty of London which a number of European countries, including Britain, had signed to ensure Belgium's neutrality). The Germans attack on France was also planned to be a very heavy one, with 90% of German forces attacking, the remaining 10% protecting the eastern border from Russian attack. ...read more.

This part of the plan was based on the Franco-Prussian, when the French were defeated. Another part of the Schlieffen Plan was that it was very strictly timetabled, there was a set time for everything to happen so that no confusion could be caused and it could be an easy victory over France. The final part of the Schlieffen Plan was that the forces planned to use the railways as transport so that troops could quickly move from one placed to another without getting tired out by walking. All in all the Schlieffen Plan was organised so that Germany could easily win against France by using a mixture of surprise, good planning and heavy attack. ?? ?? ?? ?? This document was downloaded from Coursework.Info - The UK's Coursework Database Click here to visit Courswork.Info ...read more.