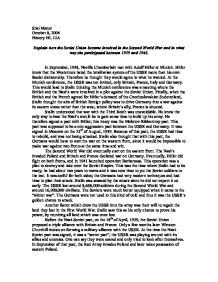 Explain how the Soviet Union became involved in the Second World War and in what way she participated between 1939 and 1945.

Shai Manor October 8, 2004 History HL 12A Explain how the Soviet Union became involved in the Second World War and in what way she participated between 1939 and 1945. In September, 1938, Neville Chamberlain met with Adolf Hitler at Munich. Hitler knew that the Westerners hated the totalitarian system of the USSR more than his own fascist dictatorship. Therefore he thought they would agree to what he wanted. At the Munich conference, the USSR was not invited, only Britain, France, Italy and Germany. This would lead to Stalin thinking the Munich conference was a meeting where the British and the Nazi's were involved in a plot against the Soviet Union. Finally, when the British and the French agreed for Hitler's demand of the Czechoslovakian Sudetenland, Stalin thought the aim of British foreign policy was to drive Germany into a war against its eastern states rather than the west, where Britain's ally, France is situated. Stalin understood that war with the Third Reich was unavoidable. He knew the only way to beat the Nazi's would be to gain some time to build up his army. ...read more.

Before the Nazi-Soviet pact, on the 18th of April, 1939, the Soviet Union proposed a triple alliance with Britain and France. Only a few months later Winston Churchill insists on forming a military alliance with the USSR. At the time the Nazi-Soviet pact was signed, it was a "secret pact", the USSR was playing around with its allies and enemies. One can say they were scared and only tried to look after themselves. In September of that year, the Red Army invades Poland and later takes possession of eastern Poland. When the USSR finished with Poland they invaded Finland and by the 12th of March 1940 already signed a peace treaty. Finland was quickly defeated. Later on the 25th of June 1941, Finland declared war on the Soviet Union. This time the conflict between the Finns and the Soviets lasted until an armistice was signed by both countries on the 19th of September, 1944. On the 14th of April, 1941, Japan signs a non-aggression pact with the Soviet Union. The axis-allied nation of Japan seems to be keeping its promise of the pact during the Second World War. ...read more.

Almost a year after this, they even manage to recapture Minsk. This shows that the German army was not as efficient as it used to be in the beginning of the war and that The Soviet Army was only becoming stronger. This may have been a factor of why the Cold War Started. Indeed, by the end of the war, the USSR was the second biggest aircraft producer (158,218), right after the USA (303,713). This indicated who the two main super powers were. The Soviet Union also signed a Soviet-Czech peace treaty in December of 1943 and thus the Super Power defended the Czechs. In October 1944 the Red Army entered Czechoslovakia and by the 9th of May, 1945 the German army surrendered to the Red Army. And thus, The Soviet Union was basically drawn into war because of the Munich agreement, the Nazi-Soviet Pact and its own interest in regaining land it had lost after the First World War. The USSR participated all over Europe in this war and managed to regain some land they had lost in the First World War as well as during the Second World War. The Soviet Union also participated in many agreements such as the Yalta conference, Nazi-Soviet Pact, Soviet-Czech peace treaty, Russo-Japanese non-aggression pact and many more. ...read more.