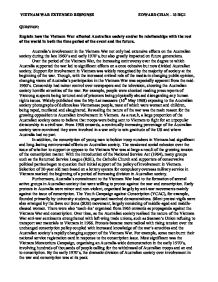 QUESTION: Explain how the Vietnam War affected Australian society and/or its relationships with the rest of the world in both the time period of the event and the future. Australia's involvement in the Vietnam War not only had extensive effects on the Australian society during the late 1960's and early 1970's, but also greatly impacted on future generations. Over the period of the Vietnam War, the increasing controversy over the degree to which Australia supported the war led to significant effects on a once cohesive but now divided Australian society. Support for involvement in Vietnam was widely recognised by the majority of society at the beginning of the war. Though, with the increased critical role of the media in changing public opinion, changing views of Australia's participation in the Vietnam War was especially apparent from the mid-1960's. Censorship had minor control over newspapers and the television, showing the Australian society horrific atrocities of the war. For example, people were shocked reading press reports of Vietcong suspects being tortured and of prisoners being physically abused disregarding any human rights issues. ...read more.

Selection of 20-year old men based on a lottery system for compulsory overseas military service in Vietnam marked the beginning of a period of increasing division in Australian society. Furthermore, Australia's commitment to the Vietnam War lead to the formation of several active groups in Australian society that were willing to protest against the war and conscription. Early protests in Australia were minor and non-violent, organised largely by anti-war movements mainly against the issue of conscription. The Youth Campaign against Conscription (YCAC), for example, founded primarily by university students, organised marched demonstrations. Silent protest vigils were also arranged by the Save our Sons (SOS) movement, largely consisting of middle-aged and middle-classed women. There were also 'teach-ins' organised from 1965 onwards as propaganda against the Vietnam War and conscription. Over time, as the Australian society realised the nature of the Vietnam War anti-war sentiments strengthened with left-wing trade unions, such as Seaman's Union refusing to transport war materials to Vietnam in 1966. Protests became more radical with rising tension over the unchanged conscription policy coupled with increased knowledge of the war's atrocities and the Australian society's rapidly changing support of the Vietnam War. ...read more.