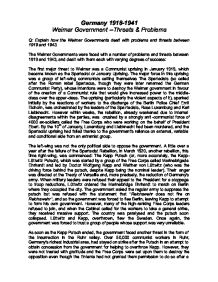 Explain how the Weimar Governments dealt with problems and threats between 1919 and 1943.

Germany 1918-1941 Weimar Government --Threats & Problems Q: Explain how the Weimar Governments dealt with problems and threats between 1919 and 1943. The Weimar Governments were faced with a number of problems and threats between 1919 and 1943, and dealt with them each with varying degrees of success: The first major threat to Weimar was a Communist uprising in January 1919, which became known as the Spartacist or January Uprising. The major force in this uprising was a group of left-wing communists calling themselves The Spartacists (so called after the Roman rebel Spartacus, though they were later renamed the German Communist Party), whose intentions were to destroy the Weimar government in favour of the creation of a Communist rule that would give increased power to the middle-class over the upper-class. The uprising (particularly the violent aspects of it), sparked initially by the reactions of workers to the discharge of the Berlin Police Chief Emil Eichorn, was orchestrated by the leaders of the Spartacists, Rosa Luxemburg and Karl Liebknecht. However within weeks, the rebellion, already weakened due to internal disagreements within the parties, was crushed by a strongly anti-communist force of 4000 ex-soldiers called the Free Corps who were working on the behalf of President Ebert. ...read more.

of whether German troops should be allowed into the Ruhr (this disobedience caused much commotion among Britain, France and Germany, leading to even more tension between the countries). The final uprising is the 'Munich Beer Hall Putsch', which took place in November 1923, led mainly by Adolf Hitler, who was at this point leader of the Kampfbund, giving him access to 15,000 brawlers and making him a well-known political leader in the south-east German state of Bavaria. However, the Bavarian leader Ritter von Kahr strongly opposed Hitler and one of his first actions as leader was to ban Hitler's proposed 14 mass meetings in late September. Hitler and Ludendorff appealed to Kahr to support them in the overthrowing of government (to prevent the threat they felt of their followers turning to Communism), but Kahr had already made plans to install a national dictatorship without Hitler, and so refused. This did not go down well with the Nazi leader. On the 8th of November 1923 Hitler, inspired by Mussolini's march on Rome, and 600 supporters burst into Kahr's meeting where he was delivering a speech to 300 people and fired a shot into the air, yelling that the "Nationalist revolution has broken out!". As his supporters stationed machine guns at the doors to prevent the audience from leaving, Hitler forced Kahr into a side room where, at gunpoint, he demanded Kahr's support but was refused. ...read more.

Government and parliament of Bavaria then fled the city. May 1920: Hans Paasche, a pacifist who assaulted modern German living and the military in his writings, was assassinated by decree of a far-right 'death squad' in a supposed raid for weapons, which were never found. Rosa Luxemburg supported him and his views. 24th of June 1922: Walther Rathenau, Germany's foreign minister and a Jewish industrialist, was assassinated 2 months after signing the Treaty of Versailles. Despite being a German nationalist he was hated by the far-right and this, along with his support of the Treaty of Versailles, led to his assassination in a plot arranged by two ultra-nationalist army officers. Rathenau's death was most definitely an early sign of the disorder and violence which would eventually contribute to the collapse of the Weimar Republic. Overall, the Weimar governments did not possess a reliable, nor an extremely logical or effective, way to suppress uprisings by itself. From 1919 to 1923, Weimar survived through the basic use of the motto 'My enemy's enemy is my friend', such as when using the workers against the Free Corps when the Free Corps had helped the government fight against workers just months before. It was not a productive way to run government, and their behaviour was merely postponing the inevitable: the collapse of the Weimar Governments. ...read more.