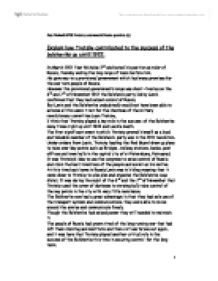 Sam Pedwell GCSE history coursework Russia question (a). Explain how Trotsky contributed to the success of the bolsheviks up untill 1922. In March 1917 Tsar Nicholas 2nd abdicated his position as ruler of Russia, thereby ending the long reign of tsars before him. He gave way to a provisional government which had many promises for the war torn people of Russia. However the provisional government's reign was short-lived as on the 6th and 7th of November 1917 the Bolshevik party led by Lenin confirmed that they had seized control of Russia. But Lenin and the Bolsheviks undoubtedly would not have been able to achieve all this were it not for the chairman of the military revolutionary committee Leon Trotsky. I think that Trotsky played a key role in the success of the Bolsheviks many times right up until 1922 and Lenin's death. ...read more.

The Bolsheviks now had a great advantage in that they had sole use of the transport system and communications, they were able to move around the armies and communicate freely. Though the Bolsheviks had seized power they still needed to maintain it. The people of Russia had grown tired of the long running war that had left them starving and destitute and then civil war broke out again, and it was here that Trotsky played another critical role in the success of the Bolsheviks this time in securing control for the long term. The anti Bolshevik parties such as the Mensheviks whilst supporting many of the Bolshevik core policies wanted them brought about in very different ways and so planned to seize power from the Bolsheviks. ...read more.

Around this time the Tsar and indeed the entire Romanov family seemed to just disappear with many rumours that they were all murdered by the Bolsheviks however these rumours were never positively confirmed. I do believe however that the Bolsheviks murdered the Tsar and his family and I believe that this was more of Trotsky's good thinking to eliminate all remnants of previous reigns and bring about the end of the monarchy and the beginning of the idea of the Bolsheviks being the rightful rulers of the soviet. Although some people opposed Trotsky as a true Bolshevik as he had earlier been involved with the Mensheviks he soon proved himself to be a great asset to the success of the Bolsheviks up until 1922 and without him the course of the Bolshevik party would not have been the same. By Sam Pedwell: ?? ?? ?? ?? 1 ...read more.