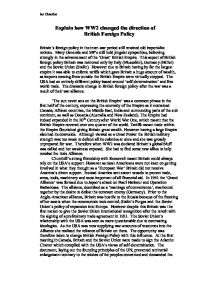 Explain how WW2 changed the direction of British Foreign Policy.

Explain how WW2 changed the direction of British Foreign Policy Britain's foreign policy in the inter-war period still retained old imperialist notions. Many Generals and MP's still held jingoist sympathies, believing strongly in the advancement of the 'Great' British Empire. This aspect of British foreign policy Britain was mirrored only by Italy (Mussolini), Germany (Hitler) and the Soviet Union (Stalin). However due to Britain having by far the largest empire it was able to enforce tariffs which gave Britain a huge amount of wealth, as imports coming from outside the British Empire were virtually stopped. The USA had an entirely different policy based around 'self-determination' and free world trade. The dramatic change in British foreign policy after the war was a result of their war alliance. 'The sun never sets on the British Empire' was a common phrase in the first half of the century, expressing the enormity of the Empire as it contained Canada, African countries, the Middle East, India and surrounding parts of the sub continent, as well as Oceania (Australia and New Zealand). The Empire had indeed expanded in the 20th Century after World War One, which meant that the British Empire covered over one quarter of the world. ...read more.

The Soviet Union were most reluctant to sign because they wished to spread their Marxist ideas across the world. As the War progressed there were further differences expressed at Grand Alliance meetings. First, although they all agreed that the defeat of Germany was the paramount issue, Stalin wanted the creation of a second front in Europe to take the pressure off the struggling Red Army. However no front would be opened until the German presence in Europe was weakened. When it became clear in 1943 that the Soviet Union would dominate Eastern and Central Europe after the War, Churchill became suspicious of Stalin. In October 1944 Churchill and Stalin signed the 'Percentages Agreement' in which Churchill hoped to prevent the establishment of a 'Soviet Bloc' by creating spheres of influence. At Yalta the Western Powers conceded Lithuania, Latvia, Estonia to Soviet Union, knowing that once the Red Army entered those countries they would be reluctant to withdraw. Churchill realising that the other Eastern European countries were likely to fall to communism was still adamant that Poland should be free and democratic. Polish borders and a constitution of a Polish Government of National Unity drawn up. There was also agreement over the dividing up of Germany into four zones. ...read more.

Truman demanded money ($400 million) from the US congress to help Greece and Turkey resist communism in what was known as the 'Truman Doctrine'. The Marshall Plan followed in which the USA again pumped money into a war torn Europe to prevent the spread of Communism. Stalin and Eastern European allies refused the program denouncing it as a trick. Another example is that the British Zone in Germany had to be fed which was the main cause for a bread ration in Britain. This resulted in the amalgamation of British and American Zones in 1947. It seems clear that Britain's foreign and defence policies from the outbreak of WW2 were fundamentally linked. Attacked by Germany, with a powerful Soviet Union on the sidelines if things went wrong after the war had ended, Britain seemed destined to forge closer links with the USA (which had almost limitless access to weapons and armaments). Although it saw the importance of a stronger Western Europe to stem any further Soviet Union advances, it made very few attempts to become part of any future European organisation. However, in aligning itself closer to the USA, a country which always worried about Britain's imperialistic past (and future aspirations), the cost for Britain was the loss of her empire. ...read more.