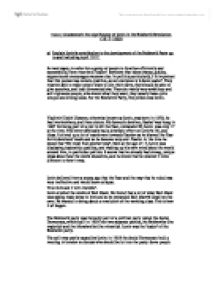 Explain Lenin's contribution to the development of the Bolshevik Party up to and including April 1917.

History Coursework: the significance of Lenin in the Bolshevik Revolution (1917-1923) a) Explain Lenin's contribution to the development of the Bolshevik Party up to and including April 1917. In most cases, in order for a group of people to function efficiently and successfully, there must be a `leader'. Someone that takes charge, guides, supports and encourages everyone else. In politics particularly, it is important that this person has certain qualities, as not everyone is `a born leader'. They must be able to make people want to join their party, they should be able to give speeches, and lead demonstrations. They are mostly very ambitious and self-righteous people, who know what they want; they usually have quite unique and strong ideas. For the Bolshevik Party, this person was Lenin. Vladimir Illyich Ulyanov, otherwise known as Lenin, was born in 1870; he had two brothers, and three sisters. His favourite brother, `Sasha' was hung in 1887 for being part of a plot to kill the Tsar, Alexander III; Lenin was only 17 at the time. This event obviously had a dramatic effect on Lenin's life, and ideas. It stirred up a lot of resentment towards Tsarism as he blamed the Tsar for his brothers' death and so he became very anti-Tsarist. ...read more.

Maybe one of the most important qualities that a leader should have, is to be able to encourage other people to achieve their goals (usually they all have the same objective). A leader should be able to make other people believe in themselves. Lenin did all of this helping his party to thrive and become more successful. He was actively involved in the Bolshevik party; he was the editor of the party newspaper `Vpeyrod', `Forward'. Many people believe that the Bolshevik paper was named `Iskra', `The Spark', but in fact this remained the Menshevik newspaper. In `Vpeyrod' Lenin was able to print his ideas. This meant that other people could read about them, and hopefully relate to what he was saying, after all it was in a similar way that Lenin himself was introduced to his beliefs. Although the Bolshevik party was very important to Lenin, he was not actually in Russia for most of the time leading up to the 1917 revolution. He lived in different European cities, planning a revolution instead of actually being part of one. However, when news reached him of the revolution, he immediately returned to Russia, and was greeted by his party. ...read more.

He persuaded some Russian millionaires to back the party, however the other ways in which money was raised were more violent and also illegal. There were many Bolshevik robberies, where gangs of members of the party robbed shops and post offices. Lenin was also the person who decided where the money would be spent. He put a lot of the money into printing the newspaper and other revolutionary literature. In this case his contribution the party was that he was not only the leader of the party, but the `idea man'. He controlled the finances, just as he controlled the party - without his financial support and ideas, the party would have been much weaker. At the time the only publicity that the party was getting was via the paper and any books Lenin was publishing. Without this the party wouldn't of been able to `spread the word' and allow other people to read about what they were trying to achieve and why they were trying to achieve it. So in conclusion, Lenin made a lot of very important contributions to the Bolshevik Party. Without him, there probably wouldn't of even been a Bolshevik party, as it was his convictions, his courage and his longing for the world he believed would make everyone happy, that not only started the party, but kept it going. ...read more.