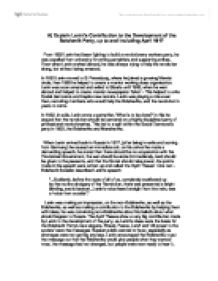 Explain Lenin's Contribution to the Development of the Bolshevik Party, up to and including April 1917.

A) Explain Lenin's Contribution to the Development of the Bolshevik Party, up to and including April 1917 From 1902 Lenin had been fighting to build a revolutionary workers party, he was expelled from university for writing pamphlets and supporting strikes. Even when Lenin worked abroad, he was always trying to help the revolution along, but without being arrested. In 1893 Lenin moved to St Petersburg, where he joined a growing Marxist circle, then 1985 he helped to create a marxist working class organisation. Lenin was soon arrested and exiled to Siberia until 1900, when he went abroad and helped to create marxist newspapers: 'Iskra' - This helped to unite Social democrats and inspire new recruits. Lenin was playing a role even then, recruiting members who would help the Bolsheviks, and the revolution in years to come. In 1902, in exile, Lenin wrote a pamphlet, 'What is to be done?' ...read more.

The April Theses show a very big contribution made by Lenin to the development of the party, as Lenin's ideas were the basis for the Bolshevik Party's new slogans, 'Bread, Peace, Land' and 'All power to the soviets' were the messages Russian public wanted to hear, especially as shortages were not getting any less. Lenin encouraged the Bolsheviks to put the message out that the Bolsheviks would give people what they wanted most, the message had not changed, but people were now ready to hear it, they wanted the end of the war. A Bolshevik supporter commented on Lenin's speech in his book 'From Lenin to Stalin': "Hardly off the train, Lenin asked the party comrades, 'Why didn't you seize power?' And at once he comes out with his April Theses...He is called mad and delirious...But suddenly it becomes apparent that he has the ear of the man in the street, and of the man in the factory and barracks! ...read more.

This contribution of Lenin's to the Bolshevik party was not a good one, although eventually Lenin helped in the second successful revolution, it would have been better to wait, and not so many Bolsheviks would have been lost in the first attempt. This was a bad contribution of Lenin's. Based on my research into Lenin and the Bolsheviks I have come to the conclusion that Lenin played a large part in helping the development of the Bolshevik party, he helped them along, although for much of the time up to 1917 he was not even in Russia, he did what he could and was a great help, even in exile. Lenin did have some ideas which even his supporters did not appreciate, and it would have been better if he had not rushed starting a second revolution, and failed. Overall I think that Lenin has made a large, and good contribution to the contribution to the Bolshevik party up to and including April 1917, with a few minor faults. ...read more.