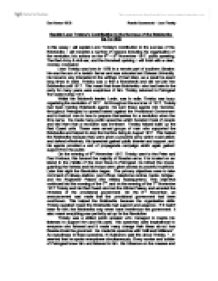 Explain Leon Trotsky's Contribution to the Success of the Bolsheviks Up To 1922 In this essay I will explain Leon Trotsky's contribution to the success of the Bolsheviks. I will consider a number of reasons including his organisation of the revolution, his actions on the 6th - 8th November 1917, public speaking, The Red Army & civil war, and the Kronstadt uprising. I will finish with a clear, concise, conclusion. Leon Trotsky was born in 1879 in a remote part of southern Ukraine. He was the son of a Jewish farmer and was educated ant Odessa University. He became very interested in the writings of Karl Marx, as a result he spent long times in exile. Trotsky was a first a Menshevik and did not join the Bolsheviks until 1917. This meant that those Bolsheviks who had been in the party for many years were suspicious of him. Trotsky returned to Petrograd from exile in May 1917. Whilst the Bolshevik leader, Lenin, was in exile, Trotsky was busy organising the revolution of 1917. ...read more.

It also meant everything was perfectly set up for the Revolution Trotsky was a skilled public speaker who managed to inspire his listeners to support him and his party. His speeches were inspirational to everyone who listened and it made many change their ideas about how Russia should be governed. He made his speeches with "skill and brilliance". An eyewitness to these speeches, N Sukhanov said this about Trotsky, "...it seemed that he spoke everywhere simultaneously. Every worker and solider of Petrograd knew him and listened to him. His influence on the masses and leaders alike was overwhelming..." His message was likely to be successful in Russia at that time because the people wanted a settled government and a government that everyone had a part in, they wanted a workers government and Trotsky promised all this and explained his ideas about communism. Where everybody received an equal share of money enough to feed, clothe, and shelter a person. He told the public what they wanted to hear. His talents in this area were important because he gained support from the public with his words, they weren't forced to obey him or follow him. ...read more.

His troops put down the soldiers; Trotsky's Red Army killed all of the thousands of sailors. This showed the strength of the Bolsheviks by brute force it showed how ruthless and strong the Red Army had become. Overall I can see that Trotsky contributed to the Bolsheviks in a number of ways. I feel that his most important contribution was to the revolution because if it wasn't for his planning then the Bolsheviks may never had got into power and if they did then they would have probably lost it quite quickly as his contribution to the red army was also important as they could defend themselves as well as attack. His speeches persuaded the people of Russia to support him and it caused lots of young men to join the Red Army. He trained the solders to the extremes and they became magnificent fighters. He had the power to do whatever he wanted and he used his army to gain it. Hi no nonsence attitude made the public feel scared but they supported him and the Bolsheviks. Leon Trotsky was a ruthless leader but made the Bolsheviks into a massive force. Dan Horton 10CS Russia Coursework - Leon Trotsky ...read more.