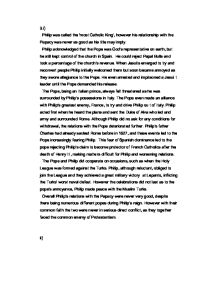 Explain Philip IIs relationship with the Papacy. How far was Philip II responsible for the outbreak of the revolts of the Moriscos, Perez and Aragon?

3.i) Philip was called the 'most Catholic King', however his relationship with the Papacy was never as good as his title may imply. Philip acknowledged that the Pope was God's representative on earth, but he still kept control of the church in Spain. He could reject Papal Bulls and took a percentage of the church's revenue. When Jesuits emerged to try and reconvert people Philip initially welcomed them but soon became annoyed as they swore allegiance to the Pope. He even arrested and imprisoned a Jesuit leader until the Pope demanded his release. The Pope, being an Italian prince, always felt threatened as he was surrounded by Philip's possessions in Italy. The Pope even made an alliance with Philip's greatest enemy, France, to try and drive Philip out of Italy. Philip acted first when he heard the plans and sent the Duke of Alva who led and army and surrounded Rome. Although Philip did no ask for any conditions for withdrawal, the relations with the Pope deteriorated further. Philip's father Charles had already sacked Rome before in 1527, and these events led to the Pope increasingly fearing Philip. ...read more.

Many Moriscos did secretly still practise their own religion and more and more laws were creating suppressing Moorish culture such as banning Moorish literature. The Moriscos were often seen as traitors with links to Turkey and Barbary Corsairs who raided Spanish coastlines. This meant they never fitted into Spanish society and felt alienated. The Moriscos were also experience economic difficulty. Their main trade, silk, was heavily taxed and also facing competition from other sources. They were also prohibited from owning slaves and after government investigation large areas of Morisco land were confiscated. This led to Moriscos feeling even more oppressed and in financial difficulty. These increasing tensions let to the Inquisitor General Espinosa being given control of the Moriscos in 1567 and by the end of 1568 the Moriscos were in revolt. Although Philip's troops recaptured over 180 villages, trouble increased with news that Espinosa intended to deport all Moriscos from Granada. Philip then appointed his half brother Don John as commander of the army. This worsened matters as Don John's undisciplined troops raped and murdered victims, causing the revolt to flare into civil war with 30,000 rebels. ...read more.

Whilst in Aragon Perez spread royal secrets including Philip's involvement in the murder of Escobedo. Philip ordered his arrest to be tried in an Inquisition court but the Aragonese nobles saw this as breach of their rights and protests turned into uncontrollable riots. Philip quickly responded by sending troops to the Aragon border and demanded the handover of Perez. More riots broke out and Perez managed to escape. However the call for the Aragonese people to declare war on Philip received little support and Philip's troops were able to crush the revolt. In both cases, Philip was partly responsible for the revolts. The Moriscos revolt was largely due to the build up of tension through the years, but Philip's decision to appoint Espinosa did not help matters and his reliance on Don John worsened the rebellion. His main faults lay with the people he appointed and this contributed to triggering the revolt. The Aragon revolt was more personally against Philip as he never visited but still attempted to assume to control over the area. There had been resentment of Castile amongst the Aragonese nobles and Philip's insistence in the capture of Perez sparked off the revolt, so in this case Philip was largely responsible for the revolt. ...read more.