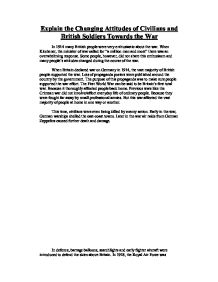 Explain the Changing Attitudes of Civilians and British Soldiers Towards the War In 1914 many British people were very enthusiastic about the war. When Kitchener, the minister of war called for "a million men and more" there was an overwhelming response. Some people, however, did not share this enthusiasm and many people's attitudes changed during the course of the war. When Britain declared war on Germany in 1914, the vast majority of British people supported the war. Lots of propaganda posters were published around the country by the government. The purpose of this propaganda was to make sure people supported the war effort. The First World War can be said to be Britain's first total war. Because it thoroughly affected people back home. Previous wars like the Crimean war did not involve/affect everyday life of ordinary people. Because they were fought far away by small professional armies. But this war affected the vast majority of people at home in one way or another. This time, civilians were even being killed by enemy action. Early in the war, German warships shelled the east-coast towns. Later in the war air raids from German Zeppelins caused further death and damage. ...read more.

Any German aged between 17-45 living in Britain were put in prison. The vast majority of the nation actually hated Germany. Casualties in the First World War were appallingly high. Twenty millions soldiers were wounded, and over eight million were killed. In the British army, one in five of the soldiers never came home. The casualties meant immense sadness not only for those who witnessed the horror of war, but also for those at home who lived in hope of the safe return of their loved ones. Another major change the government introduced from DORA was conscription. This was only introduced much later into the war when less and less people were signing up voluntarily. The reason for this is likely to be figures of battle casualties getting through, war weariness, the news of trench warfare. Or the fact that letters sent from the government telling certain civilians that their loved ones had been killed got through to many people and many people were able to identify their grief with other people in the same situation. Another reason why conscription was introduced is that the wrong kind of people were signing up: coal miners and munitions workers were needed at home. ...read more.

Total war was also a major factor, with the bombing of eastern and southern towns, to DORA. Due to heavy censorship civilian attitude to war took longer to change than the men fighting on the front. Civilian life changed dramatically during the war. Strikes in factories were banned so that there could be no threat to the productions of arms or other wartime necessities. Many civil liberties that were taken for granted were temporarily suspended. The horror of the trenches was played down but after 1916 the ever-increasing list of casualties, which the government could not hide, increased awareness in people that many hundreds of thousands were dieing and slowly morale began to falter. Many people just wanted life to return to normal and began to long for the war to be over and for their loved ones to come home. However civilians did celebrate the end of the war with parties and victory celebrations. Many had no idea what the soldiers had been through and could not understand the weary acceptance of the soldiers. The relief that it was all finally over and life could begin to return to normal was overwhelming and they all believed that it would never happen again. They though that the "war to end all wars" would be a lesson no one could forget. ...read more.