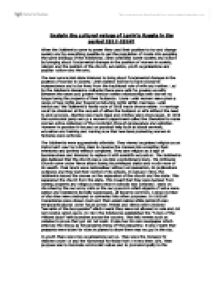 Explain the cultural values of Lenins Russia in the period 1917-1924.

Explain the cultural values of Lenin's Russia in the period 1917-1924? When the Bolsheviks came to power they used their position to try and change society and by everything possible to get the population of Russia into adopting the same ideology of the Bolsheviks.Lenin controlled soviet society and culture by bringing about fundamental changes in the position of women in society, religion and the position of the church, education, youth organisations and popular culture and the arts. The new communist state intended to bring about fundamental changes in the position of women in society. Lenin wanted women to have economic independence and to be freed from the traditional role of wife and mother. Led by the Bolshevik Alexandra Kollontai there were calls for greater equality between the sexes and greater freedom within relationships with women no longer being the property of their husbands. Under Lenin women were given a range of new rights and freedoms including rights within marriage. Lenin introduced 'the Bolshevik's family code of 1918 made divorce easier. A marriage could be dissolved at the request of either the husband or wife without the need to give grounds. Abortion was made legal and cr�ches were encouraged. ...read more.

Raids on churches by the red army units or the red guards in which objects of value were seized and resistance brutally suppressed, all became common. A large number of churches were destroyed or converted into other purposes. In 1918 all monasteries were closed down and their assets seizes while patriarch was temporarily placed under house arrest. Priests and clerics were declared "servants of the bourgeoisie" which meant they were not allowed to vote and did not receive ration cards. In 1921 the Bolsheviks established the "Union of the Militant Gods" with branches across the country. This held events such as debates to prove that god did not exist. It also had its own newspaper which attacked the clergy as fat parasites living off the peasantry. It also meant that peasants were taken for rides in planes to show there was no god in the sky. In youth there were two organisations set up. They were the Pioneers for children under 15 and the Komomsol for those from 14 into their 20's. Their purpose was to inculcate communist values and to promote loyalty to the working class. ...read more.

After the restrictions and censorship of the old regime many artists were encouraged by the Bolshevik policies especially Lenin seemed prepared to accommodate those artists who were not communist but who were sympathetic to the ideals of the revolution and who found plenty of material for their work in the events of the period. These artists were labelled by Trotsky as "fellow traveller". State control of the arts tightened in the early 1920's. During the civil war era censorship was patchy and inefficient, but in 1922 it was put on to a new footing when the directorate for literature and publishing also known as the Glavlit was formed. After 1922 al items intended for publication needed a licence from Glavlit before they could appear. Glavlit had also the responsibilities for suppressing underground literature working closely with the Cheka. In conclusion the Bolsheviks cultural values in Lenin's Russia controlled the Russian society in the period 1917-1924. It brought about fundamental changes in the position of women in society, religion and the position of the church, education, youth organisations and popular culture and the arts. These fundamental changes helped the Russian society greatly by helping them to control everything that went on in Russia. ?? ?? ?? ?? ...read more.