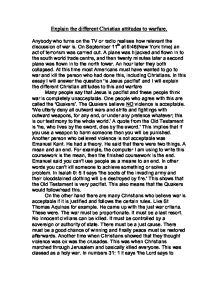 Explain the different Christian attitudes to warfare. Anybody who turns on the TV or radio realises how relevant the discussion of war is. On September 11th at 9:46(New York time) an act of terrorism was carried out. A plane was hijacked and flown in to the south world trade centre, and then twenty minutes later a second plane was flown in to the north tower. An hour later they both collapsed. At this time most Americans must have wanted to go to war and kill the person who had done this, including Christians. In this essay I will answer the question 'is Jesus pacifist' and I will explain the different Christian attitudes to this and warfare Many people say that Jesus is pacifist and these people think war is completely unacceptable. One people who agree with this are called the 'Quakers'. The Quakers believe NO violence is acceptable. 'We utterly deny all outward wars and strife and fightings with outward weapons, for any end, or under any pretence whatever; this is our testimony to the whole world.' A quote from the Old Testament is 'he, who lives by the sword, dies by the sword.' This implies that if you use a weapon to harm someone then you will be punished. ...read more.

Also in the New Testament it says about violence being unacceptable and then it goes on to tell us how Jesus smashed up the temple when he was mad. These all happened at different times so it shows that attitudes must have changed. In my opinion I feel that the bible is very contradictive. I also feel that war is acceptable under certain circumstances and if you follow the just war criteria. For a Christian, nuclear war can never be justified. Nuclear war is a violation of every human right and will demonstrate that nobody in their right mind can justify a nuclear war. Many Christians believe that nuclear war is not acceptable under any circumstances. One person who believes this is St Thomas Aquinas, he came up with the natural moral law. This means that anything that will effect education, procreation or persecution is completely unacceptable. This is because the world has a purpose and so do we. We need to live and we need to reproduce, so therefore, anything that affects this is unacceptable. St Thomas Aquinas also came up with the just war criteria. These were, the war must be proportionate, it must be a last resort, no innocent civilians must be killed, it must be controlled by and authority or sovereign of state, there must be a just cause, there must be a good chance of winning, and finally, peace must be restored afterwards. ...read more.

This meant that if, for example, killing one person would help deter 3 people then it would be acceptable. So he would think capital punishment was acceptable. This also means that he thought Hiroshima was acceptable because 140,000 people were killed instantly and children are still being born deformed, but it stopped world war three, which would probably have killed millions of people. He would also believe that some wars would be acceptable. Like in world war two when the allied planes caret bombed Dresden. It may have wiped out a whole city but it stopped them from killing a lot of our men. In conclusion I think, for a Christian, nuclear war can never be justified because it breaks the just war criteria. It is not proportionate and it will kill innocent people. If there were no nuclear bombs I feel the world would be a much better place. There would be no threats of the world ending or nuclear war. In order to prevent nuclear war, a variety of strategies and tactics needs to be pursued. Trouble spots around the world which could flare into U.S./Soviet confrontation need to be isolated from that confrontation and resolved diplomatically. The spread of nuclear weapons needs to be checked. The nuclear relationship between the U.S. and the Soviet Union needs to be managed and directed through arms control agreements. And the political pressures for building nuclear weapons need to be examined and lessened if possible. ...read more.