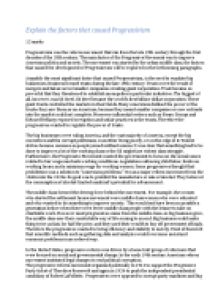 Explain the factors that caused Progressivism in the USA.

﻿Explain the factors that caused Progressivism 12 marks Progressivism was the reform movement that ran from the late 19th century through the first decades of the 20th century. The main factor of the Progressive Movement was to improve American politics and society. The movement was started by the urban middle class, the factors that caused the development of Progressivism will be explored in the forthcoming paragraphs. Arguably the most significant factor that caused Progressivism, is the need to regulate big businesses. Business formed trusts during the late 19th century. Trusts were the result of mergers and takeovers of smaller companies creating giant corporation. Trust became so powerful that they threatened to establish monopolies in particular industries. The biggest of all, however, was US Steel. US Steel became the world?s first billion-dollar corporation. These giant trusts controlled the markets in their fields. Many Americans disliked the power of the trusts: they saw them as un-American, because they meant smaller companies or new entrants into the market could not complete. ...read more.

This would not have been so possible a generation before when there were fewer middle class people with the leisure to take on charitable work. However most progressives came from the middle class. As big business grew, the middle class saw their comfortable way of life coming to an end. Big business could make thing twice as fast, for half the price, and they used their wealth to buy off government officials. Therefore the progressives wanted to bring efficiency and stability to society. Most of them felt that scientific methods such as gathering data and analysis would overcome social and economic problems in an ordered way. In the United States, progressive reform was driven by a loose-knit group of reformers that were focused on social and governmental change. In the early 19th century American reform movement instituted legal changes to end political corruption. The progressive reform movement organised politically in 1912 to support the Progressive Party ticket of Theodore Roosevelt and again in 1924 to push the independent presidential candidacy of Robert LaFollette. ...read more.

By the late 19th century, Protestant Churches had moved away from the need for individual enterprise and hard work and accepted that adverse, social conditions could lead to people becoming evil. The so- called The Social Gospel movement is a Protestant Christian intellectual movement that was most prominent in the early 20th century United States and Canada. The movement applied Christian ethics to social problems, especially issues of social justice such as economic inequality, poverty, alcoholism, crime, racial tensions, slums, bad hygiene, child labor, inadequate labor unions, poor schools, and the danger of war. The Social Gospel is an important impact in the Progressive Movement. To conclude, the need to regulate big businesses, influence of the middle classes, religious influences and the threat of the left wing all causes the development of progressivism. Each exemplified that the US was actually less united than it appeared on the surface. Therefore, strong central authority was necessary to bring reforms and to ensure efficiency. The Progressives crossed political boundaries to improve the society, as the citizens wanted, therefore the rise of Progressivism. ...read more.