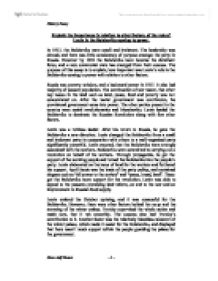 Explain the importance in relation to other factors, of the role of Lenin in the Bolsheviks coming to power.

Explain the importance in relation to other factors, of the role of Lenin in the Bolsheviks coming to power. In 1917, the Bolsheviks were small and irrelevant. The leadership was abroad, and there was little consistency of purpose amongst the party in Russia. However by 1922 the Bolsheviks have become the dominant force, and a new communist state has emerged from their success. The purpose of this essay is to explain, how important was Lenin's role in the Bolsheviks coming to power with relation to other factors. Russia was poverty stricken, and a backward power in 1917. It also had majority of peasant population. The continuation of war meant, that other key issues in the land such as land, peace, food and poverty was not concentrated on. After the tsarist government was overthrown, the provisional government came into power. The other parties present in the country were social revolutionaries and Mensheviks. ...read more.

However, there were other factors behind the coup and the storming of the winter palace. Trotsky supervised the whole action and made sure, that it ran smoothly. The success also had Trotsky's contribution to it. Another factor was the relatively bloodless takeover of the winter palace, which made it easier for the Bolsheviks, and displayed that there wasn't much support within the people guarding the palace for the government. One of the most important other factors for Bolsheviks success was Lenin's recruit Trotsky. He brought to the Bolsheviks discipline, and tight organisation. Although Lenin ordered and decided on the Bolsheviks policy, it was Trotsky who organisation of the action. Trotsky managed to get the support of military revolutionary council during the October coup. Trotsky's Red Guards, the private army for Bolsheviks were very well trained, disciplined and organised and inspired by him. They were a useful factor to Bolsheviks success and played a vital part in the seizure and maintenance of power. ...read more.

They had knowledge of the areas and they created lots of setbacks for the White army, by getting the workers to refuse to operate the white armies trains. The other factor was the failure of the white army. They were not as disciplined as the Reds, and were not as motivated and enthusiastic as the Red army. The whites were meant to be fighting together, but it was not the case. There were different groups under the White army, who did not work together. There were also foreign armies aiding them, for whom the area was new, each had their own purposes and also Lenin used this in his propaganda by saying that the provisional government was helping the country be invade by foreign forces. This excited the Reds more. There were many factors that put the Bolsheviks to power in Russia. Lenin was on of the most important factors, as he leaded the Bolsheviks in power. But there were also other factors at work that were equally important. History Essay Ovee Asif Hasan - 1 - ...read more.