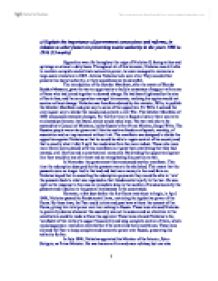 Explain the importance of government concessions and reforms, in relation to other factors in preserving tsarist authority in the years 1905 to 1914

c) Explain the importance of government concessions and reforms, in relation to other factors in preserving tsarist authority in the years 1905 to 1914 (15 marks) Opposition was rife throughout the reign of Nicholas II, facing strikes and uprisings on almost a daily basis. Throughout all of this however, Nicholas was still able to maintain complete and ultimate autocratic power, he even managed to overcome a large-scale revolution in 1905. Actions Nicholas took were vital. They would either preserve his tsarist authority, or they would become his downfall. The introduction of the October Manifesto, after the events of Bloody Sunday Massacre, gave the tsar an opportunity to build a consensus of support with some of those who had joined together to demand change. He had been frightened by the size of the strikes, and the co-operation amongst his enemies, realising his regime would not survive without change. Nicholas was therefore advised by his minister, Witte, to publish the October Manifesto and give way to some of the opposition. To Witte it seemed the only logical way to divide the masses and prevent a civil War. The October Manifesto of 1905 announced extensive changes. For the first time in Russian history there was to be an elected parliament, the Duma, which would make laws. ...read more.

He was known as firm and even ruthless, but one who recognized the new realities of the political situation within Russia. He believed that the best way to strengthen support for the regime was by reform. Stolypin was determined to change the political atmosphere in the countryside. He believed that the key to building this support lay in solving the peasant question. Stolypin therefore made all State and Crown lands available to the Peasants Land Bank for purchase by enterprising peasants. Peasants were also allowed to withdraw from their commune, without consent first, and those who had left the mir were later able to have all their land together instead of in strips. Stolypin also declared an end to the redistribution of land as the population grew, making all the land the hereditary property of the head of the family. By passing these reforms, Stolypin hoped to create a new class of well-to-do peasants, the Kulaks. These Kulaks would be able to leave the commune, extend their lands and build up their own independent farms. They would also be able to try new farming techniques and grow the crops they wished. An end to redistribution of land meant that there was now encouragement for peasants to improve their current land. Stolypin believed that this new class of peasant would provide stable support for the tsar and his government, but the reforms would need 20 years to take place, time that Stolypin didn't have. ...read more.

They were able to identify any opposition against the tsar and eliminate it, keeping the opposition at a minimum. However, luck also meant that Nicholas was able to survive as tsar in the years after the 1905 revolution. He had no need to worry about another co-ordinated revolution like 1905 as the Middle Classes, such as the now Octobrists, refused to join with the socialists again after the shambles of 1905. Industrialisation was also beginning to happen in Russia. The working classes became more contented as conditions in the factories improved and with that came better wages and living conditions. There were also good harvests between 1905 and 1913, meaning no rioting due to lack of food as there had been previously. In my own opinion, in the years 1905 to 1914, Nicholas was able to survive as tsar due to the fact that he had succeeded in dividing the masses with the October Manifesto. The opposition against him was now separated and would never again come together on such a large scale. Even the middle class had vowed never to join again with the socialists. Due to the October Manifesto Nicholas was able to separate the masses and so prolong his reign as autocratic ruler of Russia. This was until Russia entered the First World War and once again this gave the people of Russia a basis on which to stage a revolution, ending with the abdication of Nicholas II. ?? ?? ?? ?? 1 ...read more.