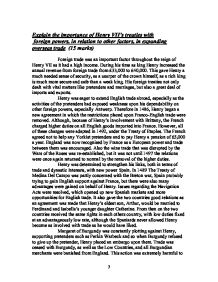 Explain the importance of Henry VII(TM)s treaties with

Explain the importance of Henry VII's treaties with foreign powers, in relation to other factors, in expanding overseas trade (15 marks) Foreign trade was an important factor throughout the reign of Henry VII as it had a high income. During his time as king Henry increased the annual revenue from foreign trade from �33,000 to �40,000. This gave Henry a much needed sense of security, as a usurper of the crown himself, as a rich king is much more secure and safe than a weak king. His foreign treaties not only dealt with vital matters like pretenders and marriages, but also a great deal of imports and exports. Henry was eager to extend English trade abroad, especially as the activities of the pretenders had exposed weakness upon his dependability on other foreign powers, especially Antwerp. Therefore in 1486, Henry began a new agreement in which the restrictions placed upon Franco-English trade were removed. Although, because of Henry's involvement with Brittany, the French charged higher duties on all English goods imported into France. However, all of these changes were adapted in 1492, under the Treaty of Etaples. ...read more.

In 1506, Philip of Burgundy was traveling to Castile when he was shipwrecked at Weymouth. Henry decided to take advantage of this situation and so lavishly entertained his guest for three months. During this time Philip and Henry agreed a treaty, called the 'Malus Intercursus', in which Philip granted special privileges for English ships in Burgundy. However this treaty never came into practice as Philip died suddenly and the treaty was never ratified. At this time, Venice was a major power in Mediterranean trade, limiting the number of trade opportunities for England. In a bid to improve the position for his merchants, Henry agreed a treaty with Florence, Venice's biggest rival, in 1490. This allowed the establishment of an English staple at Pisa, the only Italian outlet for English wool, and also restricted English wool sales to Venice. Henry also put heavy import duties on wine brought to England in Venetian ships in 1492. Venice did little to retaliate however, as they were caught up in the Italian wars and had so had little time to fight back. This left English trade in the Mediterranean to increase throughout the rest of Henry's reign. ...read more.

In 1485 and 1489, Henry with the help of Parliament passed the Navigation Acts. The Acts specified that in certain areas only English ships and English crews could be used to import and export goods. As well as limiting the power of the Hanse, this ensured that Henry had a merchant navy in time of war. Here there was some success, although by the end of 1509, 50% of goods were still moved in foreign ships. Even though it seems that Henry's expansion of overseas trade was an accomplishment, in relation to other foreign powers he was rather unsuccessful. By the time Henry's reign came to an end England was still not an established trading power in Europe and had had limited successes. To Henry security upon his throne was much more important than expanding trade, we can see this when he attempts to limit the powers of other countries. Henry had begun the development of English trade and had left it up to his successors to build upon his start. This was something which was done exceptionally well by his grandaughters, Mary I and Elizabeth I, who turned England into one of the greatest trading powers in the world. ?? ?? ?? ?? 3 ...read more.