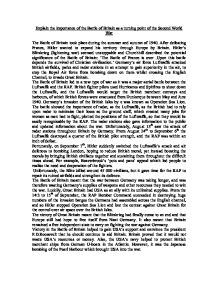 Explain the importance of the Battle of Britain as a turning point of the Second World War The Battle of Britain took place during the summer and autumn of 1940. After defeating France, Hitler wanted to expand his territory through Europe by Britain. Hitler's Blitzkrieg (lightening war) seemed unstoppable and Churchhill described the potential significance of the Battle of Britain: 'The Battle of France is over .Upon this battle depends the survival of Christian civilisation.' Germany's air force Luftwaffe attacked British airfields, parks and radar stations in an attempt to gain superiority in the air, to stop the Royal Air force from bombing down on them whilst crossing the English Channel, to invade Great Britain. The Battle of Britain led to a new type of war as it was a major aerial battle between the Luftwaffe and the RAF. British fighter pilots used Hurricanes and Spitfires to shoot down the Luftwaffe, and the Luftwaffe would target the British merchant convoys and harbours, of which British forces were evacuated from Dunkerque between May and June 1940. ...read more.

For example, Beaverbrook's 'pots and pans' appeal which led people to realise the need and desperation of the fighters. Unfortunately, the Blitz killed around 45 000 civilians, but it gave time for the RAF to repair its ruined airfields and strengthen its defence. The Battle of Britain meant that the war between Germany was taking longer, and was therefore wasting Germany's supplies of weapons and other recourses they needed to win the war. Luckily, Great Britain had USA as an ally with its unlimited supplies. From the 14th to 15th of September, the RAF Bomber Command succeeded in destroying huge numbers of the invasion barges the Germans had assembled across the English channel, and so Hitler stopped Operation Sea Lion and lost the contest against Great Britain for the control over air space over the British Isles. The victory of Great Britain meant that the Blitzkrieg had finally come to an end and that Europe still had hope to free itself from Nazi Germany. ...read more.

This invasion occurred on 6th June 1944 and is known as D-Day. The greatest importance which the Battle of Britain caused as a turning point of the Second World War was that it caused Hitler to face war on more than one front. By failing to seize England, Germany had war on several fronts. Germany had the Battle of the Atlantic, the Balkans, North Africa and the USSR to defeat. Due to heavy losses in the Battle of Britain, the attack on the USSR in 1940 was much smaller and some of the Luftwaffe had to stay behind to protect the German cities. The Battle of Britain was one of the most important moments in Britain's twentieth century history and a decisive point on the Second World War. Victory was eventually won with America and the Soviet Union, who were powerful allies, yet without the retention of the island base, in close proximity to the European mainland, it would have been impossible to launch the liberation of Europe and achieve the eventual defeat of Nazi Germany. ...read more.