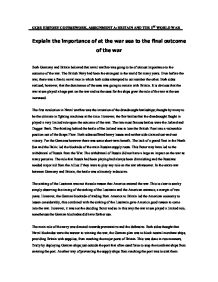 GCSE HISTORY COURSEWORK, ASSIGNMENT A: BRITAIN AND THE 1ST WORLD WAR Explain the importance of at the war sea to the final outcome of the war Both Germany and Britain believed that naval warfare was going to be of utmost importance to the outcome of the war. The British Navy had been the strongest in the world for many years. Even before the war, there was a frantic naval race in which both sides attempted to out number the other. Both sides realised, however, that the dominance of the seas was going to remain with Britain. It is obvious that the war at sea played a huge part on the war and as the uses for the ships grew the role of the war at the sea increased. The first revolution in Naval warfare was the invention of the dreadnought battleships; thought by many to be the ultimate in fighting machines at the time. However, the few battles that the dreadnought fought in played a very limited role upon the outcome of the war. The two most famous battles were the Jutland and Dogger Bank. ...read more.

Another way of preventing the supply ships from reaching the port was to sink them whilst they were out to sea; this was done by all manner of ships. The blockade system led to many countermeasures being introduced. One example was the laying of mines off the coast, this prevented any German ships to either blockade the port, or bombard the coast. Mines were laid by small, nimble ships. Mines were also placed in other key places, for example, trading routes to Germany. This played a key role in damaging German morale at the end of the war and brought the German imports down to a mere 55% of their pre-war levels. Furthermore, mines could be used to entrap the enemy ships momentarily. Another counter-measure introduced was patrol ships. These ships fortified the coast against enemy ships. Rationing was only initiated in 1918 by which time it would have been too late if the German Blockade had been employed successively. Blockades played a large role in the outcome of the war, this is because if a blockade could have been used successively for a long time, then the enemy would be forced to surrender, however, fortunately the countermeasures introduced by Britain were enough to keep itself supplied with enough rations and other necessary supplies. ...read more.

Smaller, more nimble ships played a larger role, used for the greatly successful convoy system, to lay mines, and to transport men and supplies. Overall, it is fare to say that the more smaller scale ships such as the destroyers played a larger role than the battleships. However, another kind of ship used was the submarine. The submarine was used for all manner of things, from reconnaissance to destroying ships covertly. However, the role of submarines was limited. In summate the overall impact that the war at sea was great. Obviously naval efforts were eclipsed by events on the western front. However, without the war at the sea the entire outcome of the war may have been vastly different. As both sides would have had more supplies, the war may have been lengthened. In addition, Russia may have remained in the war but this would have had very little effect. The war at sea was invaluable particularly for Britain, which being an island, would have suffered greatly without a navy, the blockade system also played a large role on all aspects of war. In conclusion, the war at sea played a huge part on the outcome of the war, and we are only able to speculate what the outcome of the war would have been without the war at sea. ...read more.