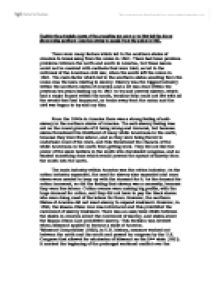 Explain the principle events of the preceding ten years or so that led the eleven slaveowning southern American states to secede from the union in 1861.

Explain the principle events of the preceding ten years or so that led the eleven slaveowning southern American states to secede from the union in 1861. There were many factors which led to the southern states of America to break away from the union in 1861. There had been previous problems between the north and south in America, but these issues could not be resolved with methods that were tried, so led to the outbreak of the American civil war, when the south left the union in 1861. The main factor which led to the southern states seceding from the union was the laws relating to slavery. Slavery was the biggest industry within the southern states of America and a lot was done within the previous ten years leading up to 1861 to try and prevent slavery, which had a major impact within the south, because they could not live with all the events that had happened, so broke away from the union and the civil war begun to try and cry this. From the 1840s in America there was a strong feeling of anti-slavery in the northern states of America. The anti-slavery feeling was not on the moral grounds of it being wrong and immoral, but because slaves threatened the livelihood of many white Americans in the north, because they were free labour, and so they were being forced to undertake most of the work, and this threatened the chances of the white Americans in the north from getting work. ...read more.

(Fugitive Slave Act of 1950) Section 4 of this act states that, "The judges of the superior court... shall grant certificates to such claimants, upon satisfactory proof being made, with authority to ake and remove such fugitives from service or labour, under the restrictions herein contained, to the state or territory from which such persons have escaped or fled." This act was set up to ensure that free states were kept 'free' and the provisions within this act were to be followed so this would happen. Another significant event which influenced the south to break away from the union in 1861 was the 'Kansas-Nebraska Act 1854.' In 1820, the 'Missouri-Compromise had excluded slavery from that part of the Louisiana Purchase (expect Missouri) north of the parallel. However, the Kansas-Nebraska Act "(May 30th 1854), in the antebellum period of U.S. history...concerning the expansion of slavery into the territories, affirming the concept of popular sovereignty." (Kansas-Nebraska Act 1854.) Popular sovereignty is defined as being "a controversial political doctrine that the people of federal territories should decide for themselves whether their territories would enter the union as free or slave states." ('Popular Sovereignty') The most crucial use of popular sovereignty was applied by the senator Stephen A. Douglas in the Kansas-Nebraska Act 1854, because this repealed the prohibition of slavery north which was established in the Missouri Compromise of 1820. ...read more.

While in the legislature, Lincoln demonstrated that 'though opposed to slavery, he was no abolitionist.' ('Abraham Lincoln') This showed that although Lincoln was opposed to slavery, he did not want to abolish it completely, which was not a total loss for the southern states. While Lincoln was president, he spent little time dealing with legislative matters, and spent most of his time dealing with slavery issues, which needed to be resolved between the northern and southern states of America. This would eventually lead to conflict between the two states, which would be the civil war, when the southern states left the union in 1861. The northern states of America wanted the west to be made up of white families who were small scale farmers who would provide them with the crops that they needed like wheat, while the southern states wanted the slaves to be allowed to work in the west. This was the main factor which led to the south seceding from the union and to the outbreak of the civil war in 1861, as the issues regarding slavery could not be agreed upon. Although many events happened that influenced Lincoln being elected president overthrew the balance, and conflict between the north and the south were inevitable. (Total words: 2210) ?? ?? ?? ?? ...read more.