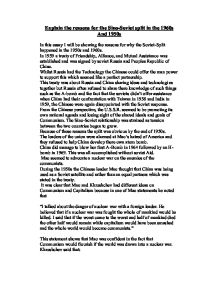 Explain the reasons for the Sino-Soviet split in the 1960s And 1950s In this essay I will be showing the reasons for why the Soviet-Split happened in the 1950s and 1960s. In 1959 a treaty of Friendship, Alliance, and Mutual Assistance was established and was signed by soviet Russia and Peoples Republic of China. Whilst Russia had the Technology the Chinese could offer the man power to support this which seemed like a perfect partnership. This treaty was about Russia and China sharing ideas and technologies together but Russia often refused to share there knowledge of such things such as the A-bomb and the fact that the soviets didn't offer assistance when China had their confrontation with Taiwan in 1958 and India in 1959, the Chinese were again disappointed with the Soviet response. From the Chinese perspective, the U.S.S.R. seemed to be promoting its own national agenda and losing sight of the shared ideals and goals of Communism. The Sino-Soviet relationship was strained as tension between the two countries began to grow. Because of these reasons the split was obvious by the end of 1950s. ...read more.

This statement shows that Mao was confident in the fact that Communism would flourish if the world was drawn into a nuclear war. Khrushchev said that: "Anyone who thinks that communism can be advanced by war belongs in the lunatic asylum." Khrushchev statement tells us that Communism could never be achieved no matter what happened in the world. These Statements by both leaders tells us that when they signed the treaty they were going to complete there own goals no matter want so overall the treaty was nothing more than a sham. The suspicions that China had against the soviets was supported greatly in the year of 1959 when Khrushchev went to the United States to have meeting with President Eisenhower. China viewed this as a betrayal of the Communist plan and that it was an attempt for worldwide revolution. This had a very important part in the crumble of the Sino-Soviet split because China wanted to be communist and not be part of the worldwide revolution which the United States of America wanted. ...read more.

During the year of 1969 the governments accused each other of provoking incidents along the border that separated China and Russia from each other. This disputed territory was surrendered to Russia in 1858 and 1860; When China was to weak to fight back and had to surrender it. The tension has been building up since and each side has armed forces on it. This clash had been threatened to brake out in 1969. Between March and August, in a series of incidents, Shots had been fired between the border guards and some guards got shot as a result of this. Each of the countries accused each other of being the aggressor and for a time there seemed to be a danger of a full scale war. Because of this incident war seemed imminent but war was averted and became a close call between the tensions that the countries shared against each other. In conclusion I thought that the Sino-Soviet split was predictable. There was too many differences in there believes and ways of life's for the treaty to stay together through the years. This could have been different if there were different leaders in charge of the countries and the communist and capitalist parties. ...read more.