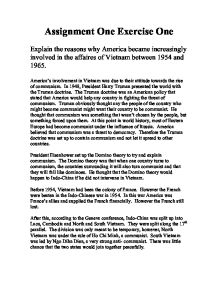 Explain the reasons why America became increasingly involved in the affaires of Vietnam between 1954 and 1965.

Assignment One Exercise One Explain the reasons why America became increasingly involved in the affaires of Vietnam between 1954 and 1965. America's involvement in Vietnam was due to their attitude towards the rise of communism. In 1948, President Harry Truman presented the world with the Truman doctrine. The Truman doctrine was an American policy that stated that America would help any country in fighting the threat of communism. Truman obviously thought any the people of the country who might become communist might want their country to be communist. He thought that communism was something that wasn't chosen by the people, but something forced upon them. At this point in world history, most of Eastern Europe had become communist under the influence of Russia. America believed that communism was a threat to democracy. Therefore the Truman doctrine was set up to contain communism and not let it spread to other countries. President Eisenhower set up the Domino theory to try and explain communism. ...read more.

Under Eisenhower, the USA aligned themselves with South Vietnam. This was due to the policies in the Truman doctrine. However, Diem's government was very unpopular and corrupt. He was also a Catholic. Therefore he was unpopular among the Buddhists in the country. He didn't do anything to help the poor in Vietnam so he was unpopular with them too. Soon there was increasing support for the Vietminh especially among the poor, Buddhist peasants in South Vietnam. A communist guerrilla party was born out of the supporters in South Vietnam called the National Liberation Front (NLF) and was known as the Vietcong. To try and combat the rising support for the NLF, President Eisenhower sent into Vietnam, several hundred military advisors. This was America's first actual involvement in Vietnam. He also sent military aid to South Vietnam. When John F. Kennedy became president in 1961, he gradually increased the number of military advisors in Vietnam. In total there were 16 000 military advisors. They played a large part in helping South Vietnam defend against Vietcong attacks. ...read more.

He believed that the USA should have a much larger role in Vietnam to try and win the war. He used the alleged attack in the Gulf of Tonkin as an excuse to attack North Vietnam. He started to send many American combat troops into Vietnam while also providing much military aid. In 1964 there were 165000 troops in Vietnam and America was fighting much of the war for South Vietnam. America's initial involvement in Vietnam between 1954 and 1965 was due to its policies on the containment of Communism. This was stated in the Truman doctrine and because of this America became involved in a war which had little to do with them. The fear of the Domino theory taking place in Asia was another reason to why they got involved. There was also a lot of pressure to conform to the Truman doctrine after the failure to combat communism in other parts of the world like Cuba, China and Korea. They chose to fight this war to show they could tackle communism. ...read more.