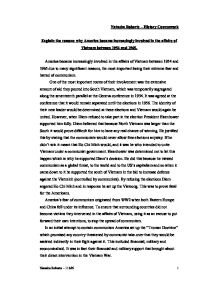 Explain the reasons why America became increasingly involved in the affairs of Vietnam between 1954 and 1965.

Natasha Roberts - History Coursework Explain the reasons why America became increasingly involved in the affairs of Vietnam between 1954 and 1965. America became increasingly involved in the affairs of Vietnam between 1954 and 1965 due to many significant reasons, the most important being their extreme fear and hatred of communism. One of the most important routes of their involvement was the extensive amount of aid they poured into South Vietnam, which was temporarily segregated along the seventeenth parallel at the Geneva conference in 1954. It was agreed at the conference that it would remain separated until the elections in 1956. The identity of their new leader would be determined at these elections and Vietnam would again be united. However, when Diem refused to take part in the election President Eisenhower supported him fully. Diem believed that because North Vietnam was larger than the South it would prove difficult for him to have any real chance of winning. He justified this by stating that the communists would never allow free elections anyway. If he didn't win it meant that Ho Chi Minh would, and it was he who intended to unite Vietnam under a communist government. Eisenhower was determined not to let this happen which is why he supported Diem's decision. He did this because he viewed communism as a global threat, to the world and to the US's capitalism and so when it came down to it he supported the south of Vietnam in the bid to increase defence against the Vietminh (controlled by communists). ...read more.

The more involved they became the more they were determined to win and the harder it became to contemplate a complete withdrawal. Despite the fact that by the peak of the war America seemed to be making the majority of decisions in Vietnam they were initially involved only by supplying aid to the French, who were fighting to regain Indo-China. Although they were anti - communist themselves they were not fighting a war against communism like the US. As the war went on the US presidents escalated their involvement further especially seeing as though the purpose of the war was increasingly becoming a fight to contain the worldwide spread of communism and not a fight for the possession of Indo-China, as it had originally been. The US constantly battled to prove that their involvement was necessary and that they could not withdraw until they had won. However, the truth was that America could have retracted all involvement at any time. It was only the stubbornness of the presidents that prevented this, as they did not want to allow Russia to believe they were stronger than America. Throughout the many prolonged years of the Vietnam War the differing views and opinions of the ever-changing presidents became an important aspect concerning Americas refusal to withdraw troops from Vietnam. President Eisenhower first became involved, as mentioned earlier, by financially supporting the French in their battle for the re-possession of Indo-China. ...read more.

He needed a strategy, an excuse to seize control of the war. Because he had won his presidential elections by a landslide he felt he had enough support from the public to do as he pleased. This is what gave him the confidence to exaggerate the Gulf of Tongking incident. The gulf of tongking incident involved the attacking of two US warplanes by the North Vietnamese. This incident provided Johnson with the excuse he needed to take control of the war. Because Johnson had publicly announced that they were under attack the civilians panicked and threw all of their support behind Johnson. This incident was a critically important event concerning America's involvement in the war, as without it he would not have had the stability to increase his involvement to the maximum. In February 1965 Vietcong attacked the US base at Pleiku. This gave Johnson permission to bomb North Vietnam, which he had refused to do without the consent of the public. Because Vietcong had attacked them first the public agreed to the bombing campaigns upon North Vietnam. An example of such a bombing raid is "Operation Rolling Thunder". As part of this raid specific targets were aimed for including roads, bridges, supply deports etc, all that were considered without the use of would be great hindrances to the Vietcong. This, Johnson knew, was a serious escalation of the war and their involvement, one that led on to a series of dire retaliations from the opposed side. 1 Natasha Roberts - 11MN ...read more.