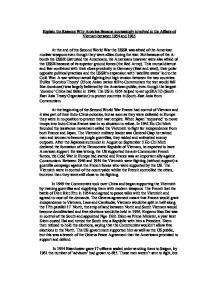 Explain the Reasons Why America Became increasingly involved in the Affairs of Vietnam between 1954 and 1965 At the end of the Second World War the USSR was afraid of the American nuclear weapons even though they were allies during the war. But because of the A-bomb the USSR distrusted the Americans, the Americans however were also afraid of the USSR because of its superior ground forces (the Red Army). This mutual distrust and fear combined with their close proximity in Germany (East and west), their polar opposite political practises and the USSR's expansion with 'satellite states' led to the Cold War. A war without actual fighting but high tension between the two countries. Dulles 'Domino Theory' (If one Asian nation fell to Communism the rest would fall like dominoes) was largely believed by the American public, even though the largest 'domino' China had fallen in 1949. The US in 1954 helped to set up SEATO (South-East Asia Treaty Organisation) to protect countries in South-East Asia from Communism. At the beginning of the Second World War France had control of Vietnam and it was part of their Indo-China colonies, but as soon as they were defeated in Europe they were in no position to protect their vast empire. ...read more.

In 1954 Eisenhower gave 17 officers sealed order sending them to Saigon, by 1961 the number of 'advisors' had grown to 685. These men weren't sent to fight, but to train the ARVN (Army of the Republic of Vietnam) with modern weapons to fight the suspected invasion from the North. President Eisenhower sent economic aid, including weapons and military equipment to support the South Vietnamese and military advisors. When President Kennedy took over he secretly increased the number of advisors to help combat the Vietcong (20,000 in 1961) as well as more equipment. Diem set up the strategic hamlets to place selected villages into; these were heavily fortified against VC infiltration. This didn't work 1 in 8 were judged safe and the villagers that were placed in them lost the land they had gained under the Vietminh. Diem also continued to favour Catholics over Buddhists, which lowered his public opinion even more as a lot of the South Vietnamese people were Buddhist. The Vietcong were gaining support and popularity though Diem's mistakes. The South Vietnamese and the US disliked Diem's corrupt regime more and more even though they had supported him in the beginning. ARVN officers who were afraid that the US would withdraw their support in 1963 assassinated Diem and his brother. ...read more.

Johnson gave 3 reasons for bombing North Vietnam, "To increase the confidence of the brave people of South Vietnam, to convince the leader of North Vietnam that we will not be defeated, and to reduce the flow of men and supplies from the North." Johnson used the air force as his main weapon to force the North Vietnamese into peace talks, he didn't realise that bombing a people doesn't work (the bombing of London in WW2), if it does anything it increases the resolve of the bombed people to fight back. Also 3,500 American Marines were sent into Danang to protect it from guerrilla attacks like the one on Pleiku, this time there was no deception of calling them 'advisors' they were sent to fight. Lieutenant-General William Westmoreland was put in charge of the military operations in Vietnam. In December 1964 there were 16,000 US servicemen in Vietnam by the end of 1965 there were 50,000 and it peaked at over 500,000 in 1968. Most of the troops were American but some were from Australia and New Zealand (members of SEATO). Even with the American forces in South Vietnam Johnson still supplied South Vietnam with equipment and trained more ARVN soldiers. ?? ?? ?? ?? ...read more.