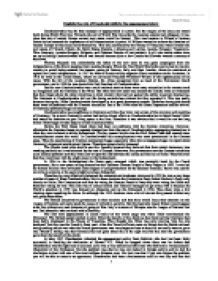 Explain the role of Czechoslovakia in the appeasement story.

Explain the role of Czechoslovakia in the appeasement story Czechoslovakia was the best example of appeasement in action. But the origins of the crisis are routed back during World War One: Towards the end of World War One after the Austrian empire had collapsed. It was clear that out of central Europe several new states would be formed. This was because in Wilson's Fourteen Points he had stressed the importance of self-determination in point 10. Wilson wanted to re-draw the frontiers of Eastern Europe so that races ruled themselves. This was confirmed by the Treaty of Versailles which formed the new states of Finland, Poland, the Baltic States (Estonia, Lithuania and Latvia), Austria, Hungary, Yugoslavia. Thus Germany, Austria-Hungary, Bulgaria, and Ottoman Empire all lost territory. In all, nine nation states were set up including Czechoslovakia which was formed because quite a few Czechs and Slovaks wanted a country of their own. Thomas Masaryk was undoubtedly the father of the new state he was great campaigner from the independence of the Slavic peoples from Austria-Hungry. When the First World War broke out he had to flee the country to avoid being arrested for treason, going to Geneva, Italy, and then London, where he continued to agitate for Czech independence. In 1917 he went to Russia to help organize Slavic resistance to the Austrians. In 1918 he went to the United States, where he convinced President Woodrow Wilson of the righteousness of his cause. With the fall of the Austrian Empire, the Allies recognized him as head of the Provisional Czech government, and in 1920 he was elected the first President of Czechoslovakia. But the new Czechoslovakia was a multi national state as there were many minorities in the country such as Hungarians and the Germans in the West. But when the new state was created the Czechs were so overjoyed that they forgot about the other minorities in their country who had not gained the ability to govern themselves. ...read more.

The tension was building between Germany and Czechoslovakia. The Czech people were mobilizing and people began to make preparations in a calm confident way because they believed that they were in the right and that they had their French and Russia allies. Moreover, they believed that when it came to it Britain would aid them as they thought that Britain would always fight on the side of the right. So there was no way that these powers would allow the democracy of Czechoslovakia to be destroyed. But the reality of the situation was that France did not want to fight and Britain wanted to give Germany the Sudentenland. During this time in August 1938 Chamberlain decided to send a representative to Czechoslovakia whose brief was to report back to him and to press on Benes the need to give concessions to Germany. This was named the Runciman mission. But when Lord Runciman came to Czechoslovakia he spent a great deal of time with the aristocratic members of Czechoslovakia many of whom where Sudeten Germans. Thus when he return to Chamberlain he said that there was no problem and as it could be resolved by a few concessions. But this was very misleading as it was not what the majority of Czechs wanted to do, as they wanted to stand firm and fight. This mission was a very peculiar thing for Chamberlain to do as it was sending an uninvited representative into another country to make a deal between it and one of the country's citizens, Henlein. Stalin was also Czechoslovakia's ally in the East. He seemed to offer more guaranteed support. The strong Soviet army was mobilised in autumn and units were brought near to the border. Therefore, it looked as though the Russians may have been willing to fight had the French also mobilised. But this may not necessarily have been the case because in the middle of 1938 Stalin had begun mass purges and ninety percent of his commanders were jailed or dead. ...read more.

However, when he got off the plane at the same time Chamberlain was being cheered in England, he was greeted by a massive applaud because the French people were so pleased that there was going to be no war. In Germany the small opposition to the Nazis attempted to present this episode as some sort of small defeat for Hitler. This was because Hitler was slightly disappointed that he had worked himself up for war and now 'the little man with an umbrella' had stopped him. This was partly true as Hitler did not like the Munich agreement because he wanted to try out army but instead it the Sudetenland had been handed to him. For the Czechs all this was the bitterest tragedy. They had experienced the height of euphoria a few days before and this was an awful pill to swallow. When they expressed their desire to fight they were threatened by their so-called allies that if they did this they would be starting a war. Hitler in a radio statement informed the world that the German army would begin to occupy the Sudetenland on October 1st. Many of the Czech soldiers wept and even when the army was retreating they still hoped that it was possible for them to fight. But confusion and revolt began to spread within the army. The consternation that their allies had sacrificed them to Hitler's aggression was so great the poets wrote poems saying, "the bulk of treason is totalling whose friends made it swing, sweet France, proud England and we love them. Jan Masaryk explain that if his country had been butchered up to preserve the peace of Europe, then he could accept it but if it does not prevent war then they have made a disastrous mistake. Less than six months later Hitler tore up the "piece of paper" and invaded the rest of Czechoslovakia resulting in the Polish guarantee which led to World War Two. David E-Evans 1 ...read more.