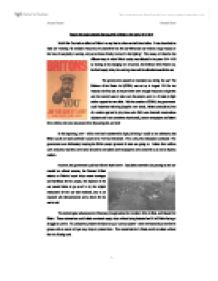 Explain the social changes that occurred in Britain in the years 1914-1918 World War One had an effect on Britain in a way that no other war had done before. It was described as 'total war' meaning "all available resources are channelled into the war effort; total war makes a huge impact on the lives of everybody in society, not just on those directly involved in the fighting." This essay will describe the different ways in which British society was affected in the years 1914-1918 by looking at the changing role of women, the Defence of the Realm Act, the food supply crisis, the working class and the attitudes towards the war. The government passed an important law during the war: The Defence of the Realm Act (DORA) was set up in August 1914 for two reasons: the first was to ensure there were enough resources to fight the war; the second was to make sure the people were in a fit state to fight and/or support the war effort. ...read more.

This meant that the U-Boats could not attack without the risk of being sunk. The rationing of food started as voluntary but quickly became compulsory. People were given coupons to hand over when they bought certain basic foods and were not allowed more than their official quota each week. This led to people hoarding food (although this was also partly due to the high prices) and there was even a black market for food. As a result of the food supply crisis, farmers were encouraged to use more land to grow food to increase food production and as the war continued, many middle-class women contributed to the war effort by joining the Women's Land Army (WLA), sometimes referred to as "the forgotten army". This was an establishment set up to involve producing more food and goods to support the war effort and initially some farmers were against this. However, in 1916 the Board of Trade started to send agricultural officers around the country to persuade the farmers to accept the women workers. ...read more.

Some ways in which the working class benefited from the war included an increased wage rate due to the shortage of labour (employers raised rates to attract labour), the low unemployment rates and higher earnings led to an increase in trade union power resulting in better working conditions and better hours. The First World War had an impact not just on the lives of the soldiers, but everyone in British society. It could be said that the changes in society were fundamental-women got the vote, the working class grew stronger and the class barriers themselves began to level-out as society was unified by the war effort. Or maybe the war had just caused a significant 'shift' in perceptions of women, the working class and attitudes about fighting for king and country. Perhaps the changes were always going to occur eventually; it just took "total war" to distinguish the strengths and weaknesses of the nation. Access History Hannah Eales - 1 - ...read more.