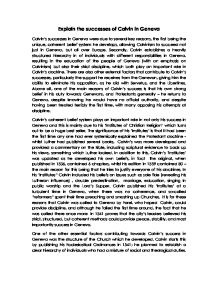 Explain the successes of Calvin in Geneva

Explain the successes of Calvin in Geneva Calvin's successes in Geneva were due to several key reasons, the first being the unique, coherent belief system he develops, allowing Calvinism to succeed not just in Geneva, but all over Europe. Secondly, Calvin establishes a heavily structured hierarchy in of individuals with different responsibilities in Geneva, resulting in the education of the people of Geneva (with an emphasis on Calvinism) but also their strict discipline, which both play an important role in Calvin's doctrine. There are also other external factors that contribute to Calvin's successes, particularly the support he receives from the Genevan, giving him the ability to eliminate his opposition, as he did with Servetus, and the Libertines. Above all, one of the main reasons of Calvin's success is that his own strong belief in his duty towards Genevans, and Protestants generally - he returns to Geneva, despite knowing he would have no official authority, and despite having been treated terribly the first time, with many opposing his attempts at discipline. ...read more.

There were to Pastors, who would be mainly responsible for preaching, teaching, reproving (whether it be privately or publically) and most importantly administering fraternal warning to those who went against Calvin's beliefs; Elders who were responsible for setting a good example, behaving as good Calvinists, supervising the citizens, ensuring they behaved appropriately, and if not they do not cooperating, arranging a "fraternal correction"; Deacons who were responsible for charity, for the poor and sick; and Doctors who were responsible for teaching the Calvinist doctrines. One other important change Calvin made was increasing the authority of the Consistory, so that it could more effectively deal with minor disputes, and in return ensure that peace and stability was maintained in Geneva. Calvin's Ecclesiastical Ordnances provided both discipline and education to the people of Geneva, giving everyone the opportunity to read, but also ensuring that those who went against his beliefs were punished, and hence they are so important in shaping the outcome of the Reformation, and Calvin's successes in Geneva. One of the most significant factors of Calvin's success in Geneva is the support he maintained from powerful people, and the increasing Protestant population in Geneva. ...read more.

Firstly, Calvin's coherent belief system, via his 'Institutes of Christian', played a very important role in not only shaping the Reformation in Geneva, but all over Europe, and this is proven by the fact that countries such as Scotland and Holland were made Protestant due to Calvin's work, and still remain so today. Secondly, and perhaps most importantly, Calvin's proposed new structure of the Church played an important role in his future successes, ensuring that religion was relevant to all aspects of life. Thirdly, Calvin was successful due to the support he had from power of Genevans through which he was able to stop and destroy any opposition to him. Most importantly though, Calvin succeeded in Geneva through his character; his own, disciplined lifestyle served as the perfect example as to how his followers should behave, and although he was influenced by characters such as Erasmus and Luther, he was able to a provide much needed logical and practical methods which they had overlooked and hence he had such an enormous impact on the course of the Reformation, perhaps going as far as ensuring its survival. ?? ?? ?? ?? ...read more.