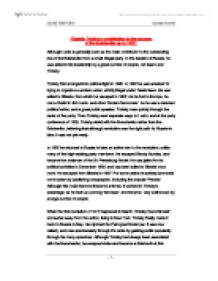 Explain Trotsky&amp;#146;s contribution to the success of the Bolsheviks up to 1922

"Explain Trotsky's contribution to the success of the Bolsheviks up to 1922" Although Lenin is generally seen as the main contributor to the outstanding rise of the Bolsheviks from a small, illegal party, to the leaders of Russia, he was aided in his leadership by a great number of people, not least Leon Trotsky. Trotsky first emerged into political light in 1896. In 1897 he was arrested for trying to organize a workers union, strictly illegal under Tsarist laws. He was exiled to Siberia, from which he escaped in 1902. As he fled to Europe, he met a Vladimir Ilich Lenin, and other 'Social-Democrats'. As he was a talented political writer, and a great public speaker, Trotsky rose quickly through the ranks of the party. Then Trotsky went separate ways to Lenin, and at the party conference of 1903, Trotsky sided with the Mensheviks rather than the Bolsheviks, believing that although revolution was the right path for Russia to take, it was not yet ready. ...read more.

This left Trotsky as the most senior member of the Bolsheviks party. Trotsky carried on with his many speeches, drumming up as much support for the Bolsheviks as possible. He also formed the Red Guard from loyal Bolsheviks in September, ready to defend against a rebel army leader, Kornilov, and troops which he had gathered from enemies of the Provisional Government and Bolsheviks. Although there was no fighting, as Kornilov's men refused to fight the Bolsheviks, the Red Guard still remained as an image of the domination of the Bolsheviks over the Soviets in most Russian cities and towns On the night of 6th November 1917, Trotsky led the Red Guard troops that took over strategic points of Petrograd, without much opposition. In the morning Trotsky then led them into the Winter Palace, and overthrew the Provisional Government. Now that the Bolsheviks had some grasp on power, Trotsky was assigned to the peace negotiations with Germany. ...read more.

This proved to work extremely well, and with harsh discipline, the Red Army was a worthy opponent to the Whites. The Bolsheviks ensured that people did not help the Whites by ordering the Cheka (secret police) to shoot or hang any anti- Bolsheviks. This brutal oppression became known as the Red Terror, and ensured that the people were loyal to their Bolshevik leaders. Trotsky found that he had a natural talent for military strategies, and through his leadership, and strict discipline, the Reds began to turn the tide of the war. The last White army was defeated in 1920, and the Bolsheviks were finally in firm control of Russia. Trotsky was seen as a hero for his brilliant leadership. Trotsky contributed a great amount to the success of the Bolshevik revolution in Russia, but even more after they seized power, in the effort to gain control. Without him, the Bolsheviks were likely never to have got into power in the first place, let enough long enough to build the communist state of which they dreamed. ?? ?? ?? ?? GCSE HISTORY Gareth Harris - 1 - ...read more.