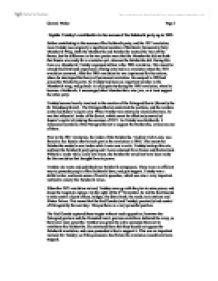 Explain Trotsky's contribution to the success of the Bolshevik party up to 1922.

This put them in a very powerful position. The Red Guards captured these targets without much opposition, however the Petrograd garrison and the Kronstadt naval garrison could have defeated the army, as they were more powerful. Trotsky was given the job to persuade them not to overthrow the Bolsheviks. He convinced them that they should not oppose the Bolshevik revolution, and even persuaded a few to support it. This was an important moment for Trotsky, as if this persuasion had failed, the revolution would have been stopped. After the Revolution, when the Bolsheviks had taken control, Trotsky still contributed to their success. He was the man in charge of negotiating the peace agreement with Germany. The Treaty of Brest-Litovsk meant that Russia lost 34% of its population, and 32% of its farming land, but it also got Russia out of the Great War and showed that the Bolsheviks were keeping their word. One of their most famous campaign slogans was "Peace, Bread and Land". ...read more.

Without Trotsky, the Bolsheviks were unlikely to have got into power, let alone long enough to build the communist state of which they dreamed. Trotsky was an outstanding personality, and intelligent enough to be the backbone of the Bolsheviks. Mikhail Uritsky, a Bolshevik activist in 1917 said, "Now the great revolution has come, one feels that however intelligent Lenin may be he begins to fade beside the genius of Trotsky." Mikhail Uritsky, obviously, realised that Lenin was not the only powerful force in the Bolshevik party. Lenin was the face of the Bolshevik party, and the main public speaker, so he probably was responsible for more recruits and supporters than Trotsky, but without Trotsky the Red Guards would have been defeated during the 1917 revolution, and the Treaty of Brest-Litovsk may never have been signed which would have lost the Bolsheviks the support they needed. Trotsky was a significant part of the Bolshevik party, and although they may still have got to power without him, he made sure they did it with as little trouble as possible. Gemma Weber Page 1 ...read more.