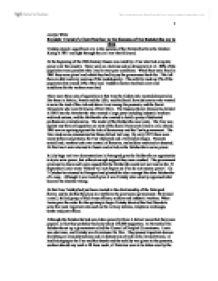 Jocelyn White Explain Trotsky's Contribution to the Success of the Bolsheviks up to 1922 Trotsky played a significant role in the success of the Bolsheviks from the October Rising in 1917 and right through the civil war that followed. At the beginning of the 20th Century Russia was ruled by a Tsar who had complete power over the country. There were no elections and no democracy at all. 80% of the population were peasants who lived in very poor conditions. When they were freed in 1861 they were given land which they had to pay the government back for. This left them in debt and very envious of the landed gentry. The nobility made up 1% of the population but owned 25% of the land. Industrialisation had been slow and conditions for the workers were bad. There were three sets of opposition at that time the Cadets who wanted democracies like those in Britain, France and the USA, and the Social Revolutionaries who wanted to seize the land of the rich and share it out among the peasants, and the Social Democrats who were followers of Karl Marx. The Russian Social Democrats divided in 1903 into the Mensheviks who wanted a large party including industrial workers and trade unions, and the Bolsheviks who wanted to build a party of dedicated professional revolutionaries. The leader of the Bolsheviks was Lenin. The Tsar was against any form of opposition so most of the Social Democrats lived in exile abroad. 1905 saw an uprising against the lack of democracy and the Tsar's government. The Tsar made some concessions but these did not last long. By early 1917 there were many strikes and protests, the Tsar abdicated and a Revolution began. Peasants seized land, workers took over control of factories, and soldiers mutinied or deserted. At this time Lenin returned to Russia and called on the Bolsheviks to seize power. ...read more.

The following year he added, "Stalin is too crude...Therefore I propose comrades to find a way to remove Stalin and appoint a man more patient, more loyal, more polite, more attentive to comrades." The following January he died. It can be seen that he had clear views on the two people who ended up as opponents in the battle for leadership, and that it was not Lenin's opinion that Stalin was necessarily the best choice. After Lenin's death most Bolshevik's were aware of Trotsky's intellectual abilities and talents, but they were also suspicious of him. He had not always been a Bolshevik and his late conversion from being a Menshevik, and it was thought that he was not a true communist. His 'self-confidence' mentioned by Lenin was certainly a disadvantage as it meant that he kept aloof from party members in the last months of Lenin's life. He did not recognise a need to create a popular following, a role Stalin was pursuing actively. At this time and immediately following Lenin's death Stalin was busy cultivating the cult of 'Leninism', and painting himself as the staunchest and most faithful follower. Trotsky's disagreements with Lenin over policy, particularly the setting up of the NEP put him at a great disadvantage. Although he was clearly talented and able Trotsky was not popular and refused to try to present himself in an appealing light. By contrast Stalin was working hard to become known amongst the party members and his position as general secretary to the Central Committee gave him every opportunity to do so. His blameless and steadfast political support of the Bolshevik movement contrasted favourably with Trotsky's early political history, and his outward hero-worshipping of Lenin endeared him further. He carefully set up and organised Lenin's funeral as a great event at the same time telling Trotsky the wrong date so that he would look as if he didn't care for or honour the previous honoured leader. ...read more.

Although targets were not always met by 1937 production was way ahead of where it had been in 1927. It is therefore my opinion that the statement at the start is largely true. The four factors were not independent of each other, and each would have been less effective in the absence of the others. Stalin's economic policy was dependent to a large extent on the secret police who were everywhere. If a worker took time off they were fined or humiliated, and anyone making a mistake was accused of sabotage and sent to a prison camp. Without the NKVD and the control of the media through censorship, and the use of propaganda, such harsh penalties may not have been tolerated by the ordinary workers and peasants. Also without the NKVD the opposition of the kulaks could not have been quashed so speedily. The purges also played a part in Stalin's ability to push through his economic plans as without removing his political opponents he would have found carrying out his extreme policies more difficult. In turn the purges could not have taken place without the NKVD spying and arresting and carrying out Stalin's orders. The purges were also used as a propaganda message to the public that opposition would be forcefully dealt with. As well as playing a role in the purges and show trials, propaganda was an essential ingredient in stimulating the Russian people in their superhuman efforts to meet their targets. Without the purges Stalin could have been prevented from succeeding by political opposition. Without the NKVD Stalin could have been stopped by the peasants or workers rebelling, or by his political opponents. Without his economic policy Stalin would not have been able to turn Russia into a great industrial nation, or provide his people with free medicine and education, or bring agriculture under state control. Throughout all these runs Stalin's great propaganda machine, and his extraordinary establishing of Stalinist culture that underpins them all. None could have assured him of retaining power without the others. 1 ...read more.