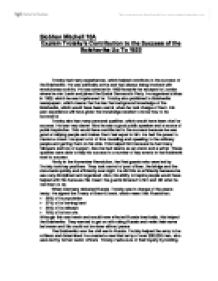 Explain Trotsky's Contribution to the Success of the Bolsheviks Up To 1922.

Siobhan Mitchell 10A Explain Trotsky's Contribution to the Success of the Bolsheviks Up To 1922 Trotsky had many experiences, which helped contribute to the success of the Bolsheviks. He was politically active and has always being involved with revolutionary activity. He was arrested in 1900 however he escaped to London where he met Lenin and joined the Social Democratic Party. He organised strikes in 1905, which he was imprisoned for. Trotsky also published to Bolsheviks newspapers, which means that he has the background knowledge of the Bolsheviks, which would have been useful, when he took charge of them. His past experience will have given the knowledge needed to know how to be successful. ...read more.

Firstly in the November Revolution, the Red guards who were led by Trotsky took key positions. They took control of post offices, the bridge and the state bank quickly and efficiently over night. He did this so efficiently because he was very disciplined and organised. Also, his ability to inspire people would have helped with this because this meant the guards listened to him and did what he told them to do. When Germany defeated Russia, Trotsky was in charge of the peace treaty. He signed the Treaty of Brest-Litovsk, which meant that Russia lost; � 25% of its population � 27% of its farming land � 26% of its railways � 75% of its iron ore. ...read more.

Through harsh discipline and brilliant leadership, Trotsky's Red army began to turn back White forces. It was very important for the Bolsheviks to win the civil war so they could set up a communist state quickly. In March 1921, the sailors at Kronstadt mutinied. They demanded an end to the communist dictatorship when they had once been supporters of it. Trotsky thought that if they were prepared to mutiny, anyone could. On 16-17 March, Trotsky order 50,000 Red Army troops to storm the Kronstadt fortress, in which the sailors were defeated. Trotsky dealt with the mutinied quickly. He showed his ruthlessness and that he would crush anyone whom went against him. Trotsky contributed many things to the success over the Bolsheviks. He personal qualities gave helped him to organise the army and take control quickly and efficiently. ...read more.