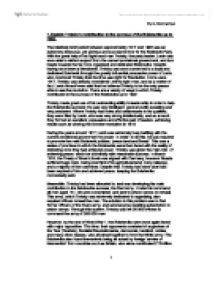 1. Explain Trotsky's contribution to the success of the Bolsheviks up to 1922. The relatively brief period between approximately 1917 and 1922 was an extremely strenuous, yet glorious and successful time for the Bolshevik Party. With the great help of his right hand man Trotsky, the party leader, Lenin was soon able to deflect support from the current provisional government, and turn heads towards the far more organised and dedicated Bolsheviks. Despite having once been a Menshevik, Trotsky was soon converted to a loyal and dedicated Bolshevik through the greatly influential persuasive power of Lenin, who convinced Trotsky that the time was right for Revolution. Come June 1917, Trotsky was already considered Lenin's right-man, and as a matter of fact, Lenin himself even said that he believed Trotsky to be the only person able to sae the revolution. There are a variety of ways in which Trotsky contributed to the success of the Bolsheviks up to 1922. ...read more.

Through this system, Trotsky was left 20 000 officers to command the army of 300 000 men. However, by the end of World War 1, the Bolsheviks were once again faced with major opposition. This time, their opponents consisted of supporters of the Tsar (Tsarists), Socialist Revolutionaries, democrats, landlord, nobles, and many other classes, who all joined together to form the White army. The Bolsheviks also found themselves being attacked by foreign 'armies of intervention' from countries such as Britain, who alone contributed �12million towards the cause. At this point, the Bolsheviks were in serious trouble. For example, their leader Lenin was almost killed after having been shot three times in the neck. The panic amongst the Bolsheviks was demonstrated when they murdered the royal family (the Tsars) in order to prevent them leading the white armies. Despite the immense pressure, Trotsky was not willing to let the party down, and he immediately stepped up his army in a most brutal fashion. ...read more.

In 1919, the foreign armies of intervention were withdrawn, and the white armies were left to fight alone. Foolishly, they failed to unite as a team, and so were extremely erratic, enabling Trotsky to take them on, one-by-one. Come the end of 1919, the only remaining whites fighting were extremely isolated groups, who stood virtually no chance of success, leaving the Bolsheviks safe for the time being. At one point, Trotsky said, 'I felt like a surgeon who has finished a difficult, and dangerous operation - I must wash my hands, take off my apron and rest'. This success was really a collective result of all of Trotsky's successes and contributions to the Bolshevik party, and emphasises the enormity of his importance to their success. As a conclusion, it is apparent that Trotsky made an enormous and critical contribution to the successes of the Bolsheviks. In particular was the way in which he devoted himself so well to supporting and organising the Red Army. By doing so, Trotsky was able to defeat the huge number of opponents, who challenged the Bolsheviks in the coming years to 1922. Tom McCretton 1 ...read more.