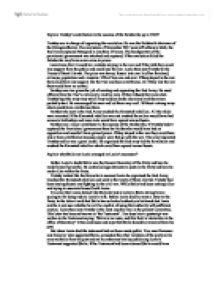 Explain Trotsky's contribution to the success of the Bolsheviks up to 1922?

Explain Trotsky's contribution to the success of the Bolsheviks up to 1922? Trotsky was in charge of organising the revolution. He was the Bolshevik chairman of the Petrograd Soviet. The revolution of November 1917 went off without a hitch, the Red Army captured Petrograd in less than 24 hours. The headquarters of the provisional government was attacked and captured. If the revolution failed the Bolsheviks may have never come to power. Lenin knew that it would be a mistake staying in the war and if they did they could lose support from the public and could lose the war. Lenin then sent Trotsky to the Treaty of Brest-Litovsk. The price was heavy, Russia lost over 1/4 of her farmland, railways, population and a massive 74% of iron ore and coal. If they stayed in the war they could have lost support like the Tsar and been overthrown. Or if they lost the war they would have no control. Trotsky was also given the job of creating and organising the Red Army. He used officers from the Tsar's old army to lead his men. If they refused they were shot. Trotsky kept the army very strict if any soldiers broke any army laws they were probably shot. ...read more.

He claimed that he phoned Moscow and Stalin told him the wrong date and said he wouldn't make it in time. However there was no evidence to this statement. Trotsky mainly was very arrogant and assumed he was to be Lenin's replacement. He would have been if Lenin's Testament had been made public. Trotsky had underestimated Stalin and his criticism of Stalin was not effective. Trotsky had lack of support for his idea to spread Communism to other countries. Gradually Trotsky was removed from the Party and eventually exiled from the Soviet Union in 1929. Stalin no longer needed Zinoviev and Kamenev and he had them expelled, as they were potential rivals. By the end of 1929 Stalin was firmly in control of the Soviet Union. The following were equally important reasons why Stalin was able to hold on to power in the Soviet Union: The purges and show trials The secret police Propaganda and the cult of personality Stalin's economic policies Explain how far you agree with this statement. When Stalin gained total power of the Soviet Union Stalin's policies were to increase food supplies, control the peasants and to industrialize Russia. ...read more.

The propaganda showed Stalin with Lenin to show that he was the natural successor. This propaganda indoctrinated the young and spread communist messages. Stalin's economic policies made Russia Stronger. In ten years they trebled their industrial output and became the second largest superpower in the world. Stalin kept the workers and farmers busy. Slave labour was also a major factor in their economic success. The workers worked hard through motivation from the propaganda and fear of the secret police. I disagree that all the factors were equal because some are more vital than others. The secret police carried out the purges and show trials put people in the slave labour camps and make the workers work harder through fear of them. The show trials helped Stalin remove potential opponents and justified the purges. The purges supplied a large slave labour force and made people afraid to oppose Stalin. The propaganda makes people believe Stalin is like a God, omnipresent and omnipotent. Stalin's Economic policies kept workers to busy to even think of a revolution. All of these factors are interconnected but they're not equally important the purges are probably the most important thing that helped Stalin keep power. The purges gave the secret police a reason for people to be afraid of them, they provided a slave labour force and scared off and eliminated potential rivals. ...read more.