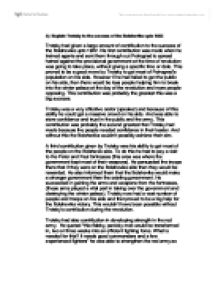 Explain Trotsky to the success of the Bolsheviks upto 1922

A) Explain Trotsky to the success of the Bolsheviks upto 1922 Trotsky had given a large amount of contribution to the success of the Bolsheviks upto 1922. His first contribution was made when he trained agents and sent them through out Petrograd to spread hatred against the provisional government at the time of revolution was going to take place, without giving a specific time or date. This proved to be a good move by Trotsky to get most of Petrograd's population on his side. However if he had failed to get the public on his side, then there would be less people helping him to break into the winter palace at the day of the revolution and more people opposing. ...read more.

And without this the Bolsheviks couldn't possibly achieve their aim. A third contribution given by Trotsky was his ability to get most of the people on the Bolshevik side. To do this he had to pay a visit to the Peter and Paul fortresses (this area was where the government kept most of their weapons). He persuaded the troops there that if they were on the Bolsheviks side then they would be rewarded. He also informed them that the Bolsheviks would make a stronger government than the existing government. He succeeded in gaining the arms and weapons from the fortresses, (these arms played a vital part in taking over the government and destroying the winter palace). ...read more.

This meant Trotsky was a very effective, efficient commander/leader. This was another one of his achievements and contribution to the Bolshevik party. If it weren't for his training the army wouldn't have succeeded in the civil war or the revolution. This proved to be a major contribution. The conclusion that I draw is "Trotsky's contribution to the success of the Bolsheviks is that he had a lot of potential determination and commitment within himself and it was these main factors which helped him to lead his troops and army's into revolution to achieve his aim. His strongest point was his ability to talk to the people and make speeches and use his brain and plan his moves. These were all his greatest contributions. ...read more.