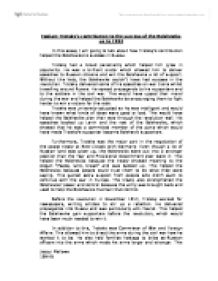 Explain Trotsky's contribution to the success of the Bolsheviks up to 1922 In this essay I am going to talk about how Trotsky's contribution helped the Bolsheviks to success in Russia. Trotsky had a broad personality which helped him grow in popularity. He was a brilliant orator which allowed him to deliver speeches to Russian citizens and win the Bolsheviks a lot of support. Without this help, the Bolsheviks couldn't have had success in the revolution. Trotsky delivered some of his speeches on war trains whilst travelling around Russia. He spread propaganda to his supporters and to the soldiers in the civil war. This would have upped their moral during the war and helped the Bolsheviks by encouraging them to fight harder to win a victory for the reds. Trotsky was university educated so he was intelligent and would have known what kinds of ideas were good or bad. ...read more.

The treaty also strengthened the Bolsheviks' power and control because the army was brought back and used to help the Bolsheviks maintain that control. Before the revolution in November 1917, Trotsky worked for newspapers, writing articles to stir up a rebellion. He delivered propaganda into Russia and was particularly anti-Tsarist. This helped the Bolsheviks gain supporters before the revolution, which would have been much needed to win it. In addition to this, Trotsky was Commissar of War and Foreign Affairs. This allowed him to direct the army during the civil war how he wanted it to be. He also held families hostage to bribe ex-Russian officers into the army which made his army larger and stronger. This helped the Bolsheviks to success in the civil war because his army was more experienced and therefore more likely to win the war. ...read more.

This helped the Bolsheviks minimize White supporters and 'enemies' by arrest, torture or murder. Trotsky was further ruthless by commanding generals of his Red Army to shoot any soldier who deserted his post or didn't want to fight any more. This helped the Bolsheviks gain complete loyalty throughout the army because Trotsky created fear in the soldiers so they wouldn't desert, and therefore the Reds would have a bigger army to win the civil war with. Finally, Trotsky had a part in the writing of new Communist Laws. These laws helped the Bolsheviks keep control and stabilised the power in Russia. The laws also made the people act and do what the Bolsheviks wanted them to, so order and control was kept. In conclusion, Trotsky contributed largely to the Bolsheviks up to 1922. Using his intelligence, his ruthlessness and his experience as a military leader Trotsky gained the support he needed to keep control and power in Russia for the Bolsheviks. Jacqui Mellows 10KHB ...read more.