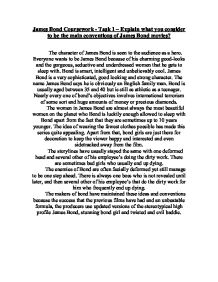 Explain what you consider to be the main conventions of James Bond movies?

James Bond Coursework - Task 1 - Explain what you consider to be the main conventions of James Bond movies? The character of James Bond is seen to the audience as a hero. Everyone wants to be James Bond because of his charming good-looks and the gorgeous, seductive and underdressed women that he gets to sleep with. Bond is smart, intelligent and unbelievably cool. James Bond is a very sophisticated, good looking and strong character. The name James Bond says he is obviously an English family man. Bond is usually aged between 35 and 40 but is still as athletic as a teenager. Nearly every one of bond's objectives involves international terrorism of some sort and huge amounts of money or precious diamonds. The women in James Bond are almost always the most beautiful women on the planet who Bond is luckily enough allowed to sleep with Bond apart from the fact that they are sometimes up to 10 years younger. ...read more.

James Bond Coursework - Task 2 - How Bond films have developed and changed over the years Women characters have not specifically changed during the years, each bond girl as attractive as the other. In most bond films women are seen as useless and incredibly passive however in Live and Let Die, the women are surprisingly more intelligent, important and useful. Bonds enemies have always been after world domination that almost certainly involving terrorism The uses of gadgets and technology have seriously changed in the course of over forty years, In Dr. No the car chases were incredibly short and basic but in just ten years other bond films such as Live and Let Die had numerous car and boat chases that were not only longer but more complex and dangerous making the viewer even more excited. Over the years the creators have tried and taken this to the next level by even using cars that can fly, boats that can drive and planes that can swim. ...read more.

I have chosen him because of his charming good looks, cheeky comments and smoothness with women. Martin Kemp is known for his flattering remarks to any girl. My new bond girl is Holly Valance for the obvious reason of her amazing good looks, experience of acting and. My new enemy of bond is Vinnie Jones because of his muscular figure, sheer strength and smarmy remarks. Vinnie is My new M is Anne Widicomb My new Q is Michael Douglas Silent Assassin Plot Bonds next adventure is a difficult one; there is a serial sniper on the loose in Richmond, Virginia and he has already killed over 10 civilians. Unfortunately for James there is conference in Virginia to deal with the crisis in Iraq. It is up to Bond to stop, catch and kill the deadly killer before he strikes again. The sniper demands a ransom of $100,000,000 billion and 10 nuclear warheads. If his demands are not meant the killing continues. ...read more.