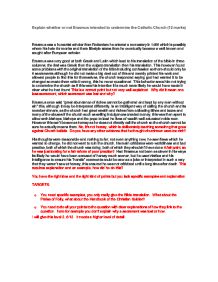 Explain whether or not Erasmus intended to undermine the Catholic Church (12 marks) Erasmus was a humanist scholar from Rotterdam he entered a monastery in 1486 which is possibly where his hate for monks and there lifestyle stems from he eventually became a well-known and sought after European scholar. Erasmus was very good at both Greek and Latin which lead to his translation of the bible in three columns; the first was Greek then the vulgate translation then his translation. This however found some problems with the original translation of the bible including confession so there should only be 6 sacraments although he did not make a big deal out of this and merely printed his work and allowed people to find this for themselves, the church responded saying god had wanted it to be changed so made them write it wrong, this he never questioned. ...read more.

Erasmus once said "great abundance of riches cannot be gathered and kept by any man without sin" this, although it may be interpreted differently, is an intelligent way of calling the church and its member sinners, as the church had great wealth and riches from collecting tithes and taxes and many of the abuses if the church such as selling indulgences created money, this was then spent to allow arch-bishops, bishops and the pope to lead he lives of wealth well educated noble men. However this can't be saw as heresy as he does not directly call the church so the church cannot be sure he actually means them. No, it's not heresy, which is deliberately teaching somethng that goes against Church beliefs. ...read more.

be saw as a joke or interpreted in such a way that they weren't saw at heresy, this ensured he was not criticized until a long time after death. This requires explanation and an example, how did he do this? You have the right idea and the right kind of points but you lack specific examples and explanation. TARGETS: o You need specific examples, you only really give the Bible translation. What about the Praise of Folly, what about the Handbook of the Christian Soldier? o You need to tie all your points to the question with clear explanations of how they link to the question. here for example you don't explain why a sacrament was lost or how. I will give this level 2, 6/12. It needs a higher level of detail. ...read more.