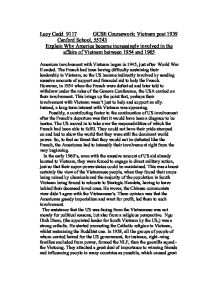 Lucy Cadd 9117 GCSE Coursework: Vietnam post 1939 Canford School, 55243 Explain Why America became increasingly involved in the affairs of Vietnam between 1954 and 1965 American involvement with Vietnam began in 1945, just after World War II ended. The French had been having difficulty sustaining their leadership in Vietnam, so the US became indirectly involved by sending massive amounts of support and financial aid to help the French. However, in 1954 when the French were defeated and later told to withdraw under the rules of the Geneva Conference, the USA carried on their involvement. This brings up the point that, perhaps their involvement with Vietnam wasn't just to help and support an ally. Instead, a long-term interest with Vietnam was appearing. Possibly, a contributing factor to the continuation of US involvement after the French's departure was that it would have been a disgrace to be beaten. The US moved in to take over the responsibilities of which the French had been able to fulfil. They could not have their pride stamped on and had to show the world that they were still the dominant world power. ...read more.

This meant that The USA were again forced to increase its military aid, just to keep the resistance movements controlled. The next point is possibly the most important reason for US involvement in Vietnam, and that is American obsession with communism. The need for the US to contain the spread of communism was reinforced by the 'domino theory' thought up by President Truman, which stated that if one domino (country-Vietnam) fell to communism, then other dominoes (or countries-Laos, Burma, Cambodia, Thailand and India,) would also fall. Both China's (who is directly above Vietnam) and Russia's communist empires were growing extremely rapidly and both were trying to extend their influences and power to the Indonesians, therefore it was vital that the US hold on to Vietnam. As the Times Magazine quoted in 1961, 'If the USA cannot or will not save South Vietnam from the communist assault, no Asian nation can ever again feel safe in putting its faith in the US.' This quote gives us evidence of how much pressure the Americans were under to be involved by Europe and the American people. ...read more.

None of them seemed able to contain, let alone defeat, the Vietnamese communists. Each time a government fell, the US had to increase their involvement a little further just to keep the society from rebellion. A major point in answering the title question is to indicate the number of advisors each President listened to. These advisors (for example, Macnamara and Henry Cabot-Lodge,) had little power but massive amounts of influence. When their field advisors told them that they only needed a little more involvement to win the war, they recommended this to the President, who were easily persuaded to increase their involvement even more. A trigger, which led to the maximisation of involvement was on August 2nd 1964. A US destroyer, Maddox, was attacked whilst patrolling the gulf of Tonkin, by three North Vietnamese patrol boats, and then again on the 4th August. The Americans started to thoroughly increase their engagement in Vietnam instantly. Every individual and every country holds a different idea about why the Americans became increasingly involved in the affairs of Vietnam between 1954-1965. Perhaps the most obvious and widespread answer, being the obsession America holds with communism. However, many people argue that it was in fact America's pride, aggression and imperialism that kept America from becoming uninvolved when the French did. ...read more.