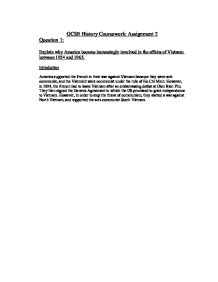 Explain why America became increasingly involved in the affairs of Vietnam between 1954 and 1965.

GCSE History Coursework: Assignment 2 Question 1: Explain why America became increasingly involved in the affairs of Vietnam between 1954 and 1965. Introduction America supported the French in their war against Vietnam because they were anti-communist, and the Vietminh were communist under the rule of Ho Chi Minh. However, in 1954, the French had to leave Vietnam after an embarrassing defeat at Dien Bien Phu. They then signed the Geneva Agreement in which the US promised to grant independence to Vietnam. However, in order to stop the threat of communism, they started a war against North Vietnam, and supported the anti-communist South Vietnam. After World War II had ended, there were fears of communism developing in Vietnam because both the French and the Japanese who had ruled over them had mistreated them. They were part of France's colony since the 1880's, when French troops completed their conquest of the Indo-Chinese area. The Vietnamese workers had poor conditions in factories, had to pay high taxes and rents, and were forced to work on public labour projects. Hatred for the French began to grow. ...read more.

They were so worried about the spread of communism because if the ideas spread throughout Asia then US interests would be threatened. The Vietcong tried to spread communism to the South by word, but if that didn't work then they used torture, terrorism and murder. The Americans knew that even their armed forces couldn't stop a communist force involving so many countries, so it was best to stop the Vietcong now, while they were still a small, manageable force. America was so anti-communist that it would rather support the corrupt government of South Vietnam, under Ngo Dinh Diem, than let communism spread to it from the North. It did this by: * Financial support * Military support, like the strategic hamlets The strategic hamlets, however, were highly unsuccessful because they were very expensive, and were heavily infiltrated by the Vietcong; only 12.5% were judged secure. President Kennedy believed that America should continue giving the South support, although he didn't agree with the persecution of the Buddhists. When President Kennedy was assassinated, his vice-president Lyndon B. Johnson was elected. The Vietcong were supported by China and the Soviet Union, who supplied them with aircraft, munitions and food. ...read more.

This excuse came in 6-7 February 1965, when the Vietcong attacked the US base at Pleiku. The public were outraged after 7 US advisers were killed, over 100 others were wounded, and 18 aircraft were destroyed. Conclusion By 1965, there was an increased amount of US involvement because they had just launched 'OPERATION ROLLING THUNDER'. This was an extensive bombing campaign to destroy Vietnamese morale, and to kill the Vietcong, and therefore contain the communist ideas. Also, President Johnson wanted to win the war, and so needed to put in more troops. The Vietcong were an almost impossible opponent, and were invisible due to their knowledge of the landscape, and their guerrilla tactics. As they wore what every other person in North Vietnam wore, and could be men, women or children, everyone was a suspect. This meant the US was fighting an unknown, unseen, invisible opponent, and so needed more people to help fight this force. By 1965, there were about 60,000 troops in Vietnam, compared to the 15,000 the year before. In 1966, however, there were triple the amount of US troops in Vietnam: 270,000! Therefore, there was a need for increased US involvement to try to stop the spread of communism, and to win the war. ...read more.