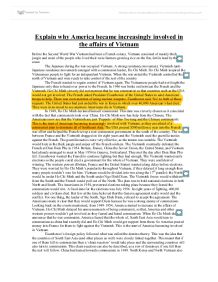 Explain why America became increasingly involved in the affairs of Vietnam

Explain why America became increasingly involved in the affairs of Vietnam Before the Second World War Vietnam had been a French colony. Vietnam consisted of mainly thick jungle and most of the people who lived their were farmers growing rice on the flat, fertile land by the coast. The Japanese during the war occupied Vietnam. A strong resistance movement, Vietminh (anti-Japanese resistance movement) emerged with a communist leader, Ho Chi Minh. Ho Chi Minh inspired the Vietnamese people to fight for an independent Vietnam. When the war ended the Vietminh controlled the north of Vietnam and were ready to take control of the rest of the country. The French wanted to regain control of Vietnam again. The Vietnamese people had not fought the Japanese only then to hand over power to the French. In 1946 war broke out between the French and the Vietminh. Ho Chi Minh cleverly did not mention that he was communist so that countries such as the USA would not get involved. The French asked President Eisenhower of the United States to send American troops to help. There was even mention of using nuclear weapons. Eisenhower said 'No' to both of these requests. The United States had just ended the war in Korea in which over 40,000 American's had died. They were in no mood to see anymore Americans die in Vietnam. In 1949, Ho Chi Minh declared himself communist. This date was cleverly chosen as it coincided with the fact that communists took over China. Ho Chi Minh now has help from the Chinese. The Americans now see that the Vietminh are just 'Puppets' of Mao Tse-tung and the Chinese communists. This is the start of American becoming increasingly involved with Vietnam, as they are afraid of a communist plan to dominate all of Southeast Asia. The USA poured $500 million a year into the French war effort and helped the French set up a non-communist government in the south of the country. ...read more.

Those villages who weren't already in the NLF often became supporters because of the way they were treated. The strategic hamlet programme was a terrible flop. In January 1963 a fight took place near the village of Ap Bac, about 60 kilometres from Saigon. About 350 Vietcong guerrillas were forced into a battle by over 2000 South Vietnamese troops, backed up by United States Helicopters with their American crews. The US was at hand again to provide support, as they were increasingly becoming involved with the Vietnam affairs. The prospects for a stunning victory looked good. Instead, five of the helicopters were shot down and three American crewmen killed. Sixty South Vietnamese troops also died. Just three VC bodies were found. The American adviser to the ARVN forces in the area, Lieutenant Colonel Vann, was angered by the failure of the ARVN commanders to work together. They squabbled with each other. Vann quit his job. He argued that the South Vietnamese was fighting the war very badly. The United States government was covering up the fact so as not to spoil relations with Diem. The press in the United States was also being kept in the dark about the war at this time. Kennedy denied that there were any American troops involved in combat in Vietnam. But American jet pilots were bombing and machine-gunning NLF areas. Helicopter pilots were also transporting ARVN forces into combat zones. After the battle at Ap Bac an American journalist asked an American military spokesman snapped back, 'Get on team.' American officials in the United States Information Service (USIS) were aware that they were losing propaganda war to the NLF. In 1962 USIS came up with the idea of a competition for a new name for the enemy. Vietcong wasn't suitable any longer. 'Viet' was wrong because it implied that (communist) was also wrong because most peasants wouldn't know what they meant anyway. The head of USIS wanted a term which would show the Vietcong as 'trainers...crackpots or madmen.' ...read more.

Congress believed that a second attack had taken place and that the North needed to be taught a lesson. Johnson proposed 'the Gulf of Tonkin' resolution congress on 7th August. The resolution or law gave the President the power to take any military measures he thought necessary to defend 'freedom' in South East Asia, including South Vietnam. Johnson now had the power to escalate or step up the level of American military involvement. But he wasn't yet willing to do this. Johnson and his advisers believed that further air attacks, if needed, would be enough to bring victory. On November 1964, they attacked the American base at Bien Hoa and destroyed five B-57 jets while damaging twenty more. Since the increase of tension with the Vietcong continued, draft calls had increased substantially in the United States and American casualties were being felt across the country. But it soon came clear that the Vietcong would prove impossible to beat by using only the South Vietnamese Army. In just two battles in December 1964 two battalions of elite, specially trained South Vietnamese troops were effectively destroyed in Vietcong ambushes. Over 700 were killed, wounded or captured - and these were the best ARVN had to offer. The NLF also attacked the US air bases. In February 1965 the NLF guerrillas destroyed ten American helicopters, killed eight servicemen, and wounded over 100. A week later, on February, the President gave his approval to 'Operation Rolling Thunder'. This meant the bombing of North Vietnam on a regular basis. It was a major escalation of the US role in the war and another quickly followed it. In March 3500 US combat troops arrived in Vietnam to protect the air bases being used to bomb North Vietnam. By the end of the year there would be 200,000 of them. American's war had begun. So the increasing involvement with Vietnam has escalated into war, which started from preventing the spread of communism. The American's now are heavily involved in Vietnam and they have subsequently created a war between themselves and the Vietcong. ...read more.

The author demonstrates impressive subject knowledge throughout this essay, with excellent detail and use of statistics to add factual depth. There are some astute evaluative comments but these regularly get lost in a narrative explanation of what happened, rather than why. To improve, a clear analytical point should be made at the start of each paragraph to demonstrate the link to the question. The conclusion is weak and should be used to clearly set out the author's key points. 3 stars.