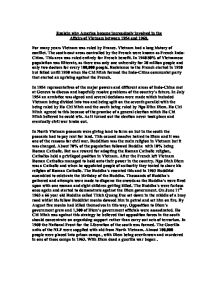 Explain why America became increasingly involved in theAffairs of Vietnam between 1954 and 1968.

Explain why America became increasingly involved in the Affairs of Vietnam between 1954 and 1968. For many years Vietnam was ruled by France. Vietnam had a long history of conflict. The south-east areas controlled by the French were known as French Indo-China. This area was ruled entirely for French benefit. In 1940 80% of Vietnamese population was illiterate, as there was only one university for 20 million people and only two doctors for every 100,000 people. Resistance to the French started in 1920 but failed untill 1930 when Ho Chi Minh formed the Indo-China communist party that started an uprising against the French. In 1954 representatives of the major powers and different areas of Indo-China met at Geneva to discuss and hopefully resolve problems of the country's future. In July 1954 an armistice was signed and several decisions were made which included Vietnam being divided into two and being split on the seventh parallel with the being ruled by Ho Chi Minh and the south being ruled by Ngo Dihn Diem. ...read more.

The Buddha's were furious once again and started to demonstrate against the Diem government. On June 11th 1963 a 66 year old Buddha called Thich Quang Duc sat down in the middle of a busy road whilst his fellow Buddhist monks dowsed him in petrol and set him on fire. By August five monks had killed themselves in this way. Opposition to Diem's government grew and 1,200 of Diem's government officials were assassinated. Ho Chi Minh was against this strategy he believed that opposition forces in the south should concentrate on organising support rather than carry out acts of terrorism. In 1960 the National Front for the Liberation of the south was formed. The Guerilla units of the NLF were supplied with aid from North Vietnam. Almost 100,000 people were placed into prison camps , with Diem being overthrown and murdered in one of these camps in 1963. With Diem dead a guerilla war began . In 1955 South Vietnam received support from America in the form of money, arms and military advisers. ...read more.

President Kennedy made it clear to the American people that he was going to follow Eisenhowers policy of supporting the south. Kennedy agreed to send the south money to increase the size of its army from 150,000 to 170,000 and he also sent 100 military advisers to help train the south Vietnamese army. After the assassination of Kennedy,President Johnson took over and he was a strong believer in the domino theory and he believed that the prevention of NLF was vital in the defence of America. Untill 1964 American involvement wasn't that much but when Johnson got re' elected they became more focused on attack. After an American spy ship "the Maddox" was attacked Johnson told his US Congress to take what action he thought necessary in the interests of US security in South east Asia. As a result the U.S air force began to strike targets in North Vietnam. Masses of bombs were dropped on North Vietnam ever more than were dropped on Germany in the second world war. Over 500,000 American troops arrived in Vietnam. Vietnam was now at war at the results would be catastrophic with thousands of Vietnamese getting killed and injured. Tom Prosser 11AA ...read more.